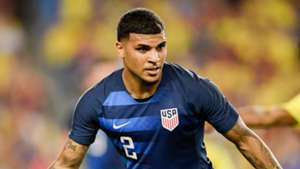 Newcastle right-back DeAndre Yedlin has spoken out against police brutality in the United States in the wake of the death of George Floyd.

Floyd died on May 25 when police officers held him down and one, Derek Chauvin, who was was subsequently charged with third-degree murder, held a knee on the 46-year-old's neck for almost nine minutes.

In another high-profile incident, Ahmaud Arbery, 25, was chased down and shot to death while jogging through a neighbourhood in Georgia in February, though Travis and Gregory McMichael were not arrested until video footage was released online in May.

Protests have spread across the country in the wake of Floyd's death, but police, encouraged by president Donald Trump, have violently cracked down on those taking to the streets.

After receiving a text message from his grandfather, who lived through the civil rights movement, Yedlin took to Twitter to discuss just how unsafe America still is for black people.

"A couple days after George Floyd's death, my grandfather texted me and told me he's glad that I am not living in the U.S. right now because he would fear for my life as a young black man," Yedlin tweeted. "As days have passed, this text from my grandfather has not been able to leave my mind.

"He was born in 1946, lived through the civil rights movement, lived through some terribly racist times in U.S. history, and now 70 years later he STILL fears for the life of his black grandchild, in the country he and his grandchild were born in.

"In no way are we asking black lives to matter more than white lives. All we're asking is we are seen as equal, as more than 3/5 of a man, as humans. My heart goes out in solidarity to George Floyd, his family, and all of the countless number of victims that have had their lives taken at the hands of meaningless police brutality."