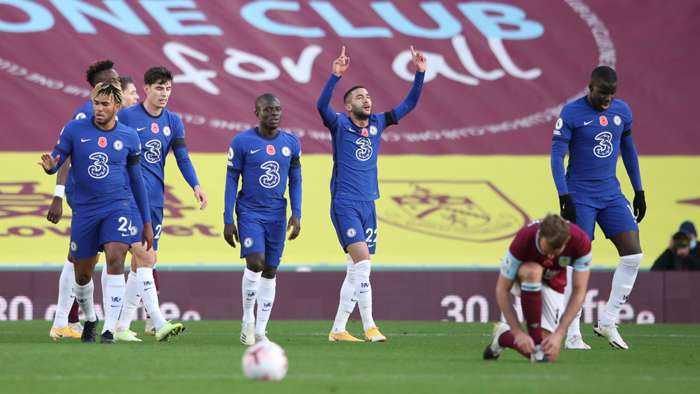 Chelsea head coach Frank Lampard is grateful for the "big boost" his side has received from in-form Hakim Ziyech.

Ziyech scored the opener on Saturday at Burnley as Chelsea cruised to a 3-0 win at Turf Moor that took them up to fourth in the Premier League table.

With the goal,Ziyech becamethe firstChelseaplayer since Diego Costa in 2014 to score on his first two starts for the clubin all competitions, after he also netted in a midweek Champions League win at Krasnodar.

After making a £37 million ($48m) move fromAjax, Ziyech's debut with Chelsea was pushed backdue to a twisted knee sustained in the club's only pre-season game away atBrighton.

Now that he is back, Lampard couldn't be happier with what he's seen from the Morocco international.

“I expected a lot of him because I was very aware of his qualities and how important they can be to the club," Lampard told a post-game press conference.

"He brings a different property to us, with an eye for a pass, his receiving, crossing and assist-making. But what I have seen since he has been here is his absolute personality when he plays to want the ball.

"His work-rate off the ball is very, very good as well. He has brought those qualities and comes with real confidence. He has given us a big boost. His demeanour, the way he plays.

"Two games in a few days with a trip to Russia for him after being out for so long has been really good by him.”

Another summer Chelsea signing starting to find his rhythm for the club is Ben Chilwell, who has started the club's last four Premier League games after recovering from an early-season foot injury.

Lampard was also full of praise for the attacking contributions made by the 23-year-old, who joined in the off-season from Leicester City.

"It has been a really positive impact and it is an important part of how I want to playinvolving our full-backs in an offensive sense," Lampard added.

"I am not taking away the defensive thing because I thought him and Reece Jamesfound the perfect moments to join in, get higher up the pitch and then perfectly recovered back up the pitch for second balls that were coming at us today.