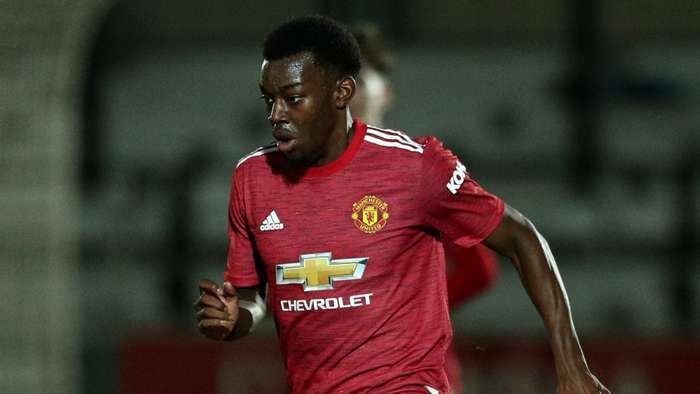 As Manchester United's Under-23s struggled to break down a strong Leicester side at Leigh Sports Village on Monday night there was one player who was a thorn in theside.

“A speedball down the left,” the Leicester television commentator described 18-year-old attacker Anthony Elanga as he warned the Foxes' fans of the danger to come from the teenager on the flank.

Any Manchester United fan sitting down to watch the club's opening fixture in Premier League 2 Division One would likely be already aware of his threat.

Injury ended his campaign early last term, just as he was on the verge of making the step up to the U23s having impressed at U18s level. Despite the layoff and subsequent lockdown he’s come back firing.

Against Salford City in the EFL Trophy last week he was impeccable; his movement, pace and work rate caused the League Two side problems all night. And his goal, United’s sixth of the evening, drew comparisons to Thierry Henry from former Red Devils captain Gary Neville,who was on commentary duty in the stands.

The way he hugged the line on the left, drifted inside, created space for himself and then curled the ball into the far corner was reminiscent of the great Frenchman’s finesse. And it’s not just the eye of opposition defenders Elanga has caught.

The forward was promoted to the first-team squad for the first time for the1-0 friendly defeat against Aston Villa on Saturday, coming off the bench in the second half and he has a place in Ole Gunnar Solskjaer’s squad firmly in his sights.

“What you see there is a boy that sees the light of the first team and wants to get there and he’s going to work every day to try and get himself in it,” U23s manager Neil Wood said.

On a night whenUnited could not impose themselves on a strong Leicester side, he was again a standout amongst a sea of teenage talent looking to make their mark.

This season is going to be a tough ask for an inexperienced U23s side who are more like an U19 team in their age profile. James Garner, who is still waiting to go out on loan, was the most experienced player in United’s starting XI,with Teden Mengi with the first team, Ethan Laird missing through an injury he picked up last week and Dylan Levitt securing his loan to Charlton Athletic.

Leicester were dominant and were twice denied by the woodwork in the first half. While United were overwhelmed in midfield and did not gain a foothold, there were still glimpses of magic from Elanga.

He linked up well with Martin Svidersky and was unlucky not to be given a penalty after Vontae Daley-Campbell failed to deal with his pace, hackinghim down on the edge of the area.

His pace is electricand with United starting the U23 season without a recognised centre-forward Elanga is going to be relied upon to unleash his inner Henry, operating across the front line and drifting inside.

Three times he was denied by Leicester;twice by Jakub Stolarczyk in goaland there was a goal-line clearance from Mitchell Clark.Elanga then could have done better in the second half when he cut inside and scuffed his shot.

Tidying up his shots and passes is something he has been working on in training - an attribute Wood is keen for him to improve.

“Just those fine moments that are so important. We want to get him really efficient, he knows that and he wants to learn and wants to improve and get the timing of his runs better, he wants to get the relationship with the midfielders so they know where he is going to run and where he wants it,” Wood said. “The challenge is there for him in the 23s this season.”

As United fell to their first defeat of the campaign, thanks to second-half goals from Ali Reghba and Clark, Elanga and his team-mates will know it’s a challenge they’re going to have to step up to meet.