Henderson: Liverpool can be a lot better, individuals will get stronger 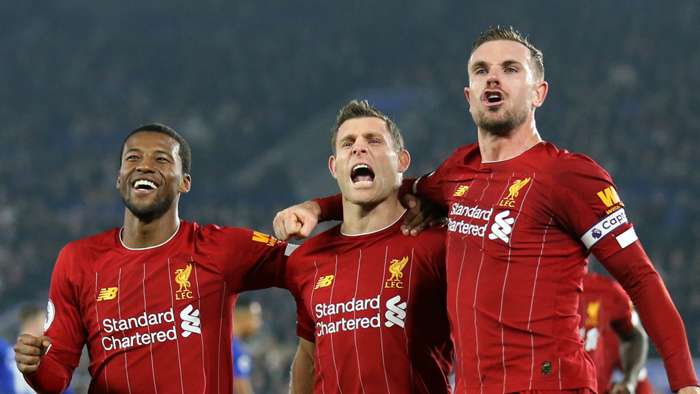 Jordan Henderson is a Champions League, Club World Cup and Premier League title winner at Liverpool, but the Reds captain says Jurgen Klopp’s side “can be a lot better”.

They were a dominant force on a domestic scene in 2019-20, with a first English top-flight crown in 30 years secured in record-setting style.

Prior to that, continental and global trophies had been captured, with Klopp smashing open the floodgates on the silverware front.

The challenge now is to maintain those standards, and Henderson believes there is more to come from Liverpool as individuals and a collective.

He told the club’s official website on not looking back at previous triumphs: “For me, there’s no real point to do it now because I still don’t feel I’ve finished, I feel there’s still a lot more to come.

“We can be a lot better. I know people will say, ‘Well, how?’ but trust us, in certain games we’ve played, in training sessions, we can still improve. Individuals can still get even better again.

“I still feel as though there is a lot more to come from all of us and if we want to be one of the best teams, then you need to do it consistently – you can’t just do it for a few years and then that’s it. You need to keep going and going and going.

“I look at what a lot of ex-players that have won trophies have said; it’s hard to win one but then it’s even harder to then win another one and another one and keep going.

“I can certainly see that and we understand that, so it’s just about basically doing what we’ve been doing for a long period of time and focusing on the right things, not getting carried away and not getting too down.

“There will be moments within a season where you maybe have a loss of form, or you’re not playing particularly well or whatever. You will have those moments and it’s about how you deal with them – and we always deal with situations in the right way and we need to continue to do that if we want to be successful again.”

As successful as Liverpool have been over the last two seasons, Henderson is adamant that everyone connected with the club is looking forward and remain as hungry as ever to savour more glory.

The England international added ahead of a Community Shield clash with FA Cup winners Arsenal on Saturday: “What’s happened in the past is incredible but it’s the past. You’ve always got to focus on what’s in front of you and that’s the most important thing.

“For us, it’s about being better. When we just lost the title – not last season, the season before – I can remember the total points was 97 and normally that wins you the Premier League, but on this occasion it didn’t and everybody was saying, ‘Well, where are you going to go from here? How are you going to improve?’ Next season we finishwith 99.