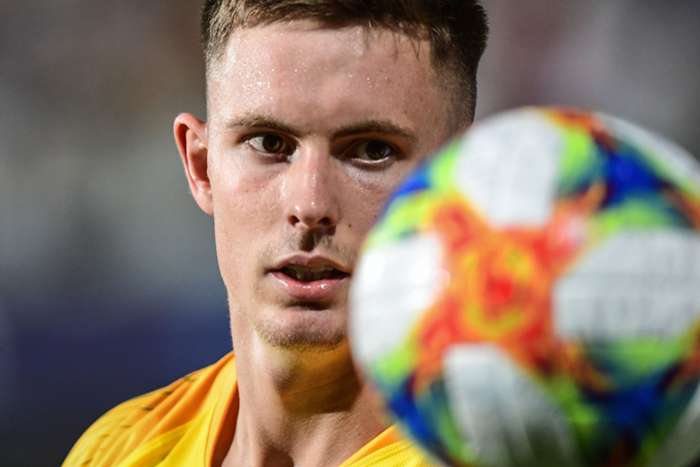 Dean Henderson is ready to embrace the “pressure” of being a Manchester United player after proving that the loan system works for players with ambition and potential.

The highly-rated goalkeeper finds himself back at Old Trafford after taking in two productive spells at Sheffield United.

Stints at Bramall Lane allowed the 23-year-old to experience promotion into the Premier League and life among the elite.

He has earned call-ups to the senior England squad along the way, while a new contract has been signed with his parent club.

David de Gea continues to provide serious competition for places with the Red Devils, with Henderson having to be patient in pursuit of the breakthrough he craves most, but the confident custodian feels he is well placed to take on another challenge.

He told United’s official website of picking up valuable experience elsewhere: “You have got to go out and embrace it with confidence, with the Manchester United badge on your chest. Embrace every moment, have a great time and I'm sure you'll learn so much.

“I have been fortunate as I've had really good loan spells but it comes from yourself. You've got to believe in yourself and want to work hard.

“I'm sure it's something a lot of boys will go out and do this season. You just learn to adapt to everything.

“For example, playing at Sheffield United is different to Stockport County and different to Grimsby. Different managers want different things and you've got to be open minded and willing to do what the manager wants to do. If you do that, you give yourself a great opportunity.

“I think other players are always excited to see what you can do on the pitch. The day you walk in, there is an aura around you as you've got that Manchester United badge on your chest. They are wondering: 'How good is this boy? We've heard a lot about him.'

“So it comes with that pressure and you've got to be top drawer straight away. I used to love going in as a Manchester United player, it makes you feel great about yourself and I performed and earned respect very quickly, which was good.”

Henderson added on his development: “I just think, when I left Old Trafford, I felt I was sort of growing into a young man. Now I've come back a lot more experienced as I learned a lot about myself, about my character - on and off the field.

“I'm coming back into the building as a man who understands the game, how it works, and now I'm an England international. It's been a great learning curve, going over to Yorkshire, and one I really enjoyed. I learned a lot and I can't thank them enough.

“Promotion last year was good, that experience of playing and fighting for something with the pressure on in all the games. Going to Elland Road and places like that, must-win games in the run-in. For me, it made me who I am today. It made me understand the pressure of things and how to get over the line and win things. That was an amazing feeling, that first season at Sheffield United.

“To go back and have the season we had in the Premier League, when everyone had written us off and said we'd be relegated and were going into the unknown, but to finish ninth in the way we did, I felt was outstanding.