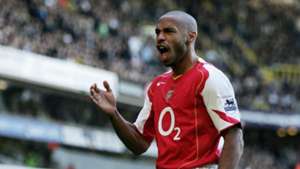 Thierry Henry was "by far the best player" at Arsenal even when operating at "70 or 80 per cent", says Dennis Bergkamp, with the Gunners once boasting an enviable collection of world-class talent.

A Dutch forward was among the first to make a move to north London and help to open up an era of memorable success for a Premier League heavyweight.

Bergkamp linked up with Arsenal prior to the arrival of Arsene Wenger, but was soon joined by the likes of Henry, Robert Pires, Patrick Vieira and Sol Campbell.

Three title triumphs were taken in at Highbury, including the fabled 'Invincibles' campaign of 2003-04.

Arsenal boasted superstar performers from back to front during that period, with it difficult to rank those at Wenger's disposal in order of talent and importance.

Bergkamp concedes as much, with there plenty of quality to rival that of Henry - the Gunners' all-time leading goalscorer.

The former Netherlands international told Arsenal's official podcast of those he once played alongside: "I find it very difficult to say [who was the best].

"I was lucky enough to play with the back four we had during the beginning of my career at Arsenal because I've never seen that. A back four and a goalkeeper that was so connected with each other, it was amazing!

"Of course, you could go for the obvious best player like Thierry Henry, which is probably true because he was the most gifted player I've seen. I saw it not only in games but in training sessions, most of the time it seemed like he was training at 70 per cent or 80 per cent and he was still by far the best player.

"It was a ridiculous time because he was so good. I played with Patrick Vieira who was a player who could change games, even in those days he would change the whole midfield by himself.

"Everyone knows his first game when he came on at half-time and he completely changed the game, how can you compare those players to each other? Henry to Vieira? Or to the back four? I find it very difficult... Pires? What a player he was. Freddie Ljungberg? Maybe he wasn't the most gifted player but how effective, how decisive was he? The defenders who came after like Kolo Toure or Sol Campbell?

"As I said, I've been lucky to play with a lot of good players but to name the best player, it is really difficult. It's impossible. Each and every one in their own position was very important to the team."

Bergkamp spent 11 years at Arsenal before hanging up his boots in 2006, with 120 goals recorded through 423 appearances.