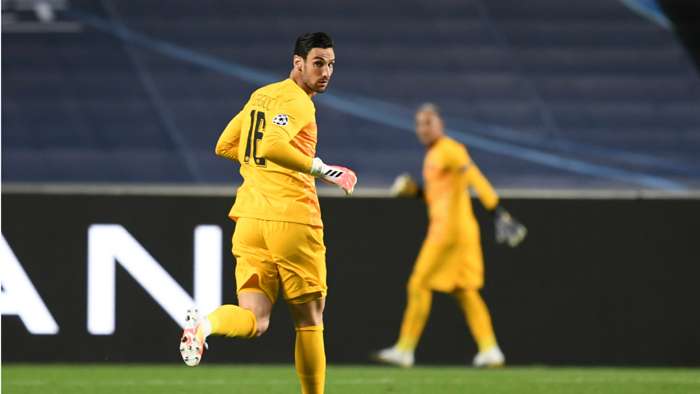 He pulled up late on in Wednesday's remarkable 2-1 comeback win over Atalanta and was replaced by back-up keeper Rico, who is now set to start in Lisbon on Tuesday.

That was on-loan stopper Rico's ninth appearance of the season and Herrera has backed the former Fulham loanee –and two-time Europa League winner with Sevilla – to step up.

"We have three fantastic goalkeepers. Sergio Rico has already won several Europa League titles. He has already shown that he is ready to help this Tuesday," he said.

Herrera started the Atalanta match but was taken off before his side staged a dramatic fightback, the Ligue 1 giants scoring twice in the space of 149 seconds to stay on course for a quadruple.

Head coach Thomas Tuchel praised Herrera's leadership qualities on the eve of the Leipzig clash, but the Spaniard insisted he has not thought about taking on the captain's armband once Thiago Silva moves on later this month.

"Since I arrived in Paris the captain is Thiago Silva so I haven't thought about this question," Herrera, who joined from Manchester United last year, said. "For me the captain is not only the one who wears the armband.

"We have a lot of captains by their actions. Marquinhos is a natural leader. He does not speak much but in training and on the pitch, he is a leader.Neymar is another leader. When you are a player who asks a lot for the ball while the team has a lot of pressure on the pitch, that's a leader.

"Keylor Navas has won a lot in his career and always tries to create a compact group.

"Thiago Silva is a fantastic leader and captain but all the groups which know the success, it is not possible with only one leader. We have many leaders with the word but also with the action."

PSG have neverreached the final of the Champions League and Herrera does not believe the Ligue 1 winnersare under more pressure than Leipzig, who have already knocked out Tottenham and Atletico Madrid.