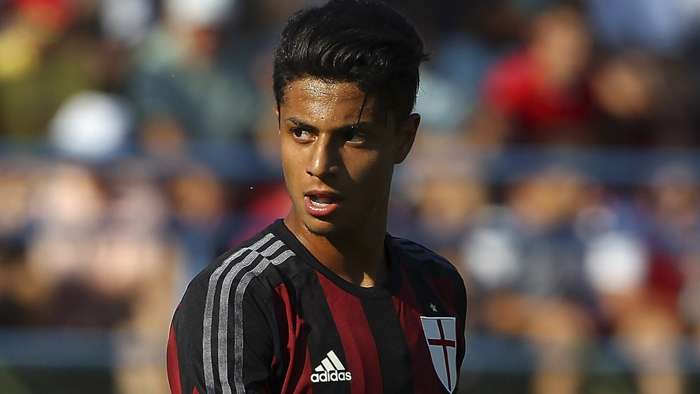 Barcelona, Juventus, Manchester City, Real Madrid. Those were just some of the clubs that tried to signHachim Mastour at the tender age of 14.

The talented youngster, who quicklybecame a YouTube sensation,ultimately signed for AC Milan in 2012 for €500,000 withClarence Seedorf even calling him up to the senior team two years later as Mastour sat on the bench for the final Serie A game of the 2013-14 season.

In the seven years since, Mastour's career has simply failed to take off, with the attacking midfielder struggling to overcome his ownhype -while also juggling injuriesand a severe lack of game time.

Arriving in Milan as a wide-eyed teenager, the Moroccanfound himself caught up in a media storm as everyone looked to get a piece of football's next big thing.

After dribbling a cherry in a skill showcase not long after being unveiled inendless interviews, Mastour was forced to grow up quickly but seemed to have the confidence to hold his own.

"My main characteristics?Ball control and dribbling.I do things that other kids my age don't do," Mastour declared to Sky after joined AC Milan.

While his flashy skills certainly set him apart from other footballers his age, the attacker was still just a kid himselfand Milan refused the temptation to simply hand him a competitivefirst-team appearance - something that would never come to pass.

After his briefexperience on the bench in 2014, Mastour was loaned out Malaga in 2015 but managed just onefive-minute cameo as the Liga side seemingly looked to leverage his high profile rather than his ability.

“I noticed the media hype with which I arrived at Milan, which consequently pushed companies and intermediaries to see in me more a chance to make money rather thanthan a sporting profile to grow and nurture," Mastour told TuttoMercatoWeb.

"This penalised my sporting growthbecause I just wanted to play.Unfortunately, the great expectations that existed ended up limiting my time on the field, which was the one thing that most interested me."

The following year, AC Milan would send their prodigy to Eredivisie outfit PEC Zwollebut once again minutes were hard to come by as Mastour featured just six times.

Returning to Italy, Mastour was left to play sporadicallyfor theRossoneri's youth team with then-coachGennaro Gattuso issuing the Morocco international a rather intense warning in 2018.

“We’ve talked a lot lately. I even threatened him because he became more famous for making videos than playing, but he doesn’t do that anymore because I told him I’d knock his teeth out!" Gattuso told a press conference at the time.

"In recent months he’s improved some things in training and we decided to let him play in the Primavera.

"The train has passed but he’s not 50 years old, he’s 20 years old in June and I think he has to take stock of his mistakes. He needs to play consistently, because we can see he’s lost some match sharpness. I’ve noticed a few improvements though."

Those improvement ultimately wouldn't be enough for AC Milan, however, who let Mastourleave later that year, with Greek side Lamia pouncing in September 2018.

After six appearances early in the season, things took acontroversial turn when he picked up an injury that his father would later claim was ignored by the club with Mastour forced to return to Italy where he paid for his own medical treatment.

Unsurprisingly, that would spell the end of Mastour's time in Greece and despite a brief training spell with Parma, the former prodigy found himself without a club heading into the 2019-20 season.

A lifeline would come his way in October with Serie C side Reggina agreeing to a deal that Mastour would struggle to make the most of as he made just a single eight-minute cameo the entire campaign.

Though a lacklustre season for Mastour, Reggina themselves sealed promotion to Serie B with their fallen star now determined to turn his career around in Italy's second division.

"I've been training with the group since the beginning of pre-season. I'm finding it very well and we have to continue on this path," Mastour said in August.

"I have a great relationshipwith team-mate Jeremy Menez, we were atMilantogether and on the pitch we speak the same language.I repeat, this is a great group, the championship is different, but the conditions are there for a great season.I expect to play a leading role together with the team, thinking game bygame."

Despite being in the media spotlight for nearly a decade now, Mastour is still just 22 and has plenty of time to resurrect his stalling career.

Looking back, he accepts his move toAC Milan was possibly the wrong one but hopes his football journey is still justbeginning.

“Look, I had a great time at Milan. It was a family for me. But maybe, in hindsight, at 14 I could have chosen a European club like Ajax, who were interested in me, and which maybe it would have kept me more distant from the Italian spotlight," he said.