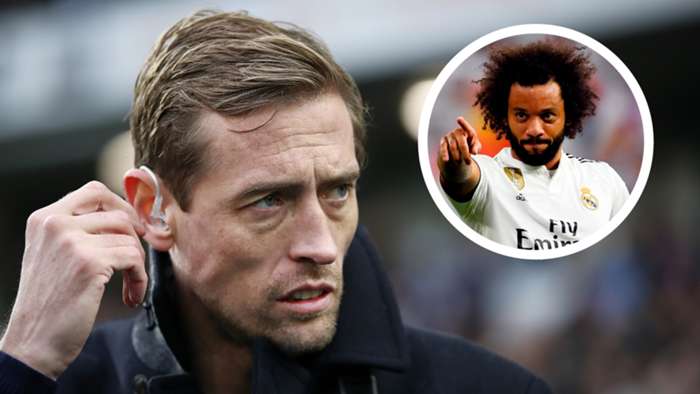 Peter Crouch has revealed he "never wanted to punch anyone more" than Marcelo after the Real Madrid full-back ensured his sending off in a 2011 Champions League clash.

Crouch picked up two yellow cards in quick succession on the night with his second coming after a questionable challenge on Marcelo.

Spurs would end up losing the match 4-0 and the return leg 1-0 as the club's European run effectively came to end after Crouch's dismissal - something he still struggles to accept all these years later.

“The dressing room is underneath the stadium and there are tiers upon tiers of fans and you can hear them. I’m sat in the dressing room with a towel over my head, hearing goal after goal after goal going in and I’m thinking: ‘that’s down to me’. That was a low point and a big regret," Crouch said onPaddy Power’s From the Horses Mouth podcast.

“I do have a little excuse when it comes to the cards though. The first one was me being excitable, so I can give the referee that. It was a tackle on Sergio Ramos.

“For the second one, I went to block a ball down the line from Marcelo and I did dive in a bit, but I didn’t touch him.

“He’s jumped up in the air and rolled around, and there is a camera angle where you can see he looks at the referee and he celebrates as the red card comes out then he jumps back up.

“I’ve never wanted to punch anyone more in my life! For them, that was seen as a win. They’ve won the game and they played me. I was naive to let myself get caught up in that.”

Real Madrid, coached by Jose Mourinho at the time, were laterknocked out in the semi-finals by Barcelona, who ended up winning the Champions League that season after defeating Manchester United 3-1 in the final.

Crouch left Tottenham at the end of that campaignand went on to play over 250 games for Stoke City before retiring in 2019 after a short stint with Burnley.