'I believe he could do Real Madrid' - Nagelsmann has what it takes to manage world's biggest teams, says Rangnick 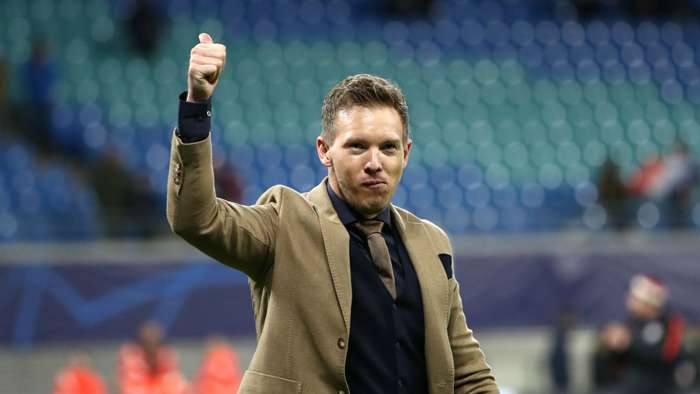 Julian Nagelsmann has been tipped as a possible Real Madrid head coach of the future after guiding RB Leipzig to the Champions League semi-finals.

Rangnick has been impressed by how 33-year-old Nagelsmann has fared in his first season as Leipzig boss, with the former Hoffenheim head coach leading the team to third place in the Bundesliga.

TheirEuropeanadventureground to a halt with a semi-final defeat to Paris Saint-Germain, but Leipzig and Nagelsmann will be back for another tilt at the Champions League in 2020-21.

"I believe he could do Real Madrid,"Rangnick told German newspaper Bild. "I think it's very possible that he could go to a better or even bigger club than Leipzig, if he wants that."

Nagelsmann has previously been linked with the Santiago Bernabeu top job, claiming in 2018 he had turned down anopportunity to step into the role.

The young boss, whose fashion sense has also caught the eye,said after the PSG defeat he felt great pride in his players following their run to the final four, havingknocked out the likes of Tottenham and Atletico Madridalong the way.

Nagelsmannsaid on Tuesday: "If we look at the attackers of PSG Neymar and Kylian Mbappe,both of themcost more than our squad, so we will see what we can do with transfers. We don't have that much money to spend."

Nagelsmann'stransfer pot may have been boosted by the sale of Timo Werner to Chelsea, but the young Germany forward was a special talent and will be difficult to replace, no matter what funds Leipzig have available.

Rangnick, whose widely anticipated move to Milan failed to come to fruition, addressed the disparity between the finances at PSG and the structure Leipzig are working within.