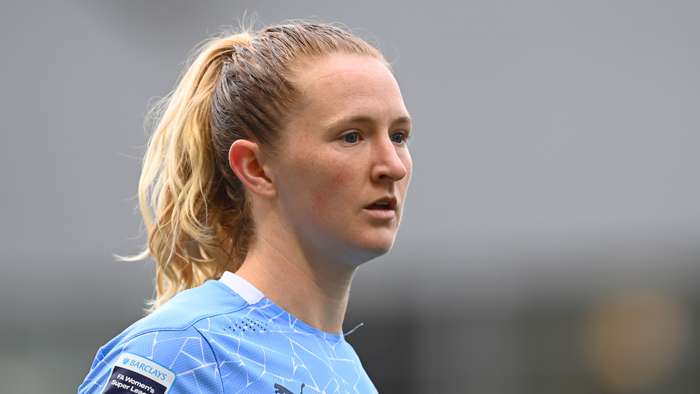 U.S. womens national team midfielder Sam Mewis is looking forward to the immense challenge Manchester City face in the UEFA Womens Champions League this week, saying that these are the tests she wanted to face in England.

The Citizens lost 3-0 in the first leg of their quarter-final tie against Barcelona last Wednesday, with the Spanish champions giving themselves a huge advantage going into the second leg.

However, Mewis, who joined the club in the summer, says that both herself and the rest of the team are ready for the challenge they face.

Speaking to reporters on Tuesday, the World Cup winner was complimentary of Barcelona, describing “their movement off the ball” as “top notch” and “some of the best I’ve played against”.

"It reminded me obviously a lot of the national team, playing against Spain," she said."I give them a lot of credit. It was definitely a difficult game. They were a great team. That awareness of movement off the ball and their technical ability was really high quality."

The battle in the middle of the pitch will be key to victory again this week, with Barcelona and Man City both boasting two of the best midfields in Europe. Mewis lined up alongside England international Keira Walsh and Scotlands Caroline Weir last week, with another World Cup winner, Rose Lavelle, featuring off the bench.

Barcelonas line-up included Alexia Putellas, who ranked at No.16 in last years Goal 50, as well as Patri Guijarro andAitana Bonmati, two of the most exciting young midfielders on the continent.

"I definitely am looking forward to the challenge [of the midfield battle]. Barcelonas midfield was great," Mewis said.

"Thats why I came here, to be challenged like this. I definitely dont think I played my best [in the first leg] and Im excited because I think our midfield, and our whole team, has a lot more that we can showcase tomorrow. It is a great test, but without tests like this, you dont get the chance to really prove how good you can be.

"I think were all really looking forward to it and we all kind of have a chip on our shoulder from last week that we want to come away from this game feeling a lot better. We know weve got to just score some goals."

Whoever progresses on Wednesday evening faces uncertainty surrounding their Champions League semi-final. The other quarter-final on the same side of the draw as Barcelona and Man City is one between French rivals Paris Saint-Germain and Lyon, with the latter winning their away leg 1-0 last week.

However, the second leg has since been postponed due to an outbreak of Covid-19 in the Lyon squad, with several players testing positive.UEFA released a statement on Tuesday saying that "the entire team delegation of Olympique Lyonnais has been placed in quarantine" and therefore the game could not take place.

The first legs of the two semi-finals are due to be played on 24/25 April, with the second legs then to come on 1/2 May. The final will be played on 16 May in Gothenburg, Sweden.