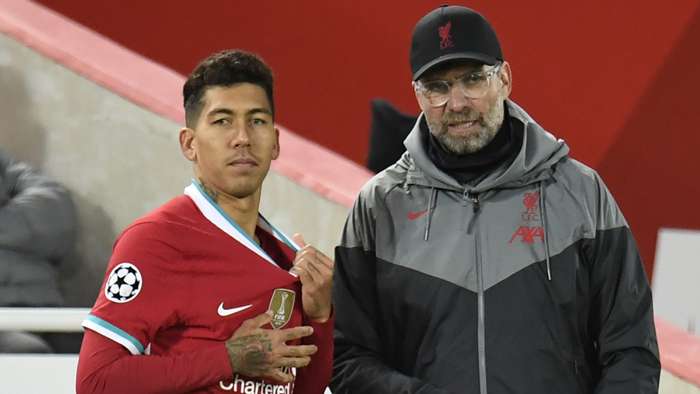 Jurgen Klopp insists Roberto Firmino's record for Liverpool should speak for itself as the manager weighs up hisattacking options for Sunday's trip to Manchester City.

With Diogo Jota making an instant impact following his arrival from Wolves, and with Mohamed Salah and Sadio Mane so influential, there has been a growing school of thought that Firmino could become the odd man out.

He has started all seven of Liverpool's league games this term but was only a substitute for the 5-0 win over Atalanta in the Champions League on Tuesday, coming off the bench to replace hat-trick hero Jota once thegame was emphatically won.

Data from Opta has shown Firmino's impact has waned in certain areas from astatistical perspective in the early weeks of the 2020-21 season.

He has averaged just 0.6 shots on target over the first seven games in the Premier League, compared to 1.2 in each of the past two campaigns, and is winning possession far less frequentlyin the final thirdof the pitch - 0.3 times per game in 2020-21 against 1.1 last term and 0.8 in 2018-19.

Firmino is creating a similar number of chances for team-mates, albeit fractionally down at 1.4 per match from 1.6 last season, and scoring just once in seven league games will not help his cause in some eyes.

But Klopp has no doubts over a player who has been integral in teams that have accrued 97 and 99 points in the last two seasons, and who won the Champions League less than 18 months ago.

"I don't have to say one word about Bobby Firmino and how important he was for us. So I don't waste time with that," Klopp said.

"People who arenot with us, I don't care if they know about him. He was in so many games the difference maker, without scoring maybe, but with scoring as well in other games. I would feel really embarrassed if I had to mention now the qualities of Bobby Firmino."

Klopp was asked further to explain what Firmino brought to Liverpool that might not be obvious to the casual observer, but he refused.

The German boss said it "would have been completely normal" if Jota had taken a while before bedding in at Liverpool, and stressed he was not expecting what the Portuguese has been producing.

But over the longer term, Klopp always thought 23-year-old Jota would be capable of bringing a fresh element to Liverpool's play, and one that would make them a better side.