'I could have won a Ballon d'Or!' - Mutu's controversial Chelsea career derailed by drugs and Mourinho 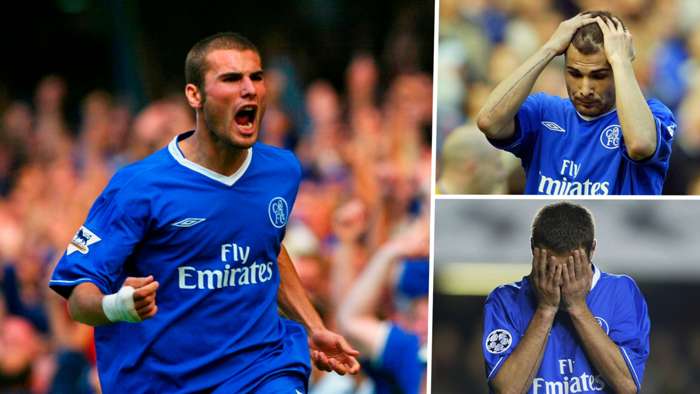 Few transfers in Premier League history have turned out to be more dramaticthan Adrian Mutu's move to Chelsea in 2003.

Mutu hit the ground running in England as he scored a winner against Leicester City on his debut and went on tobagfour goals across his first three appearances for the Blues.

The Romania international initiallythrivedunder the management of Claudio Ranieri but the goals eventually dried up as Mutu struggled to adapt to life as a Premier League star.

Jose Mourinho's arrival the following season complicated matters further with the two quickly clashing over international duties and the striker'slack of playing time at club level.

"I am in an open conflict with Mourinho, who forbade me to go to my national team and said I was injured.It is not true - I have been in good condition for five days and he knew that," Mutu declaredin 2004.

"I don't care about being fined. I want everyone to know that the national team is the most important thing for me.I told Mourinho I was fit. He disagreed and showed me a piece of paper from the medical staff claiming I wasn't. But I know I am fit.

"Mourinho has promised me that I would play in the first team for some games.Then I wasn't even in the squad and I don't understand why.Probably the only solution, even if I don't want it, is to find another team."

Chelsea were themselves growing suspicious of theirstar signing, whose off-field behaviour was turning heads, with the club taking the unusual and controversial step of ordering Mutu to take a doping test.

While that test would come back negative, another taken with anti-doping authoritiesjust two months later showed cocaine in his system. From there, Mutu's career took an inevitable nosedive.

Chelsea quicklycut all ties with the player and ended up in a messy court battle as they sought millions in compensation.Mutu himself was banned from all football for seven months but still managed to work his way to Juventus in January 2005.

After an uninspiring 18 months in Turin, that resulted in just 11 goals from 46 games, Fiorentina handed Mutu another lifeline and he initially rewarded them with 40 goals across his first two seasons.

But just as he seemed to be living up to his promise, the forward failed another doping test in early 2010 - this timetesting positive for appetite suppressant sibutramine.A six-month banfollowed with Mutu unable to repair what had quickly become afractious relationship with Fiorentina.

Despite a turbulent few years, Mutu remained confident of resurrecting his career and revealed in late 2011 just how much talent he believed he possessed.

"Maybe if I had made other decisions in the past, I could even have won the Ballon d'Or at some point. I'd rather not think about that too much, though," Mutu toldCorriere dello Sport.

In 2012, Mututhen signed for Ligue 1 club Ajaccio and boldlyclaimed he would score more goals than Zlatan Ibrahimovic, who was playing for Paris Saint-Germain at the time.

"I'm not in pre-retirement," Mutu said. "What's more, I'm launching a challenge to Zlatan Ibrahimovic -I'll score more goals than him between now and the end of the season."

Not one to back down from a challenge, Ibrahimovic would go on to score 35 goals across the 2012-13season as Mutu had to settle fora solid if unspectacular tally of 11.He then thenfailed to strikeat all across his first nine games the following campaign and opted to part ways with Ajaccio in January 2014.

A return to Romania then followed withPetrolul Ploiesti before a brief stint in India and a final disappointing spellback in his homeland forTargu Mures.

Since hanging up the boots, Mutu has managed to shake off his poor reputation as a player and wasentrusted as Romania's Under-21manager in 2019.

Now fully aware of where he went wrong at Chelsea all those years ago, one of the Premier League's more infamous characters is hopeful of ensuring his country's emergingtalents avoid the same pitfalls.

"In my first year at Chelsea I worked with Claudio Ranieri, a great coach, who wanted me in the squad. Without those personal problems, things would have been different," Mutu told BBC Sport earlier this year.

On becoming a coach, Mutu added: "I think I'm the right person because I know what happens when a player has problems with indiscipline. I've passed through hard moments and I came back stronger.