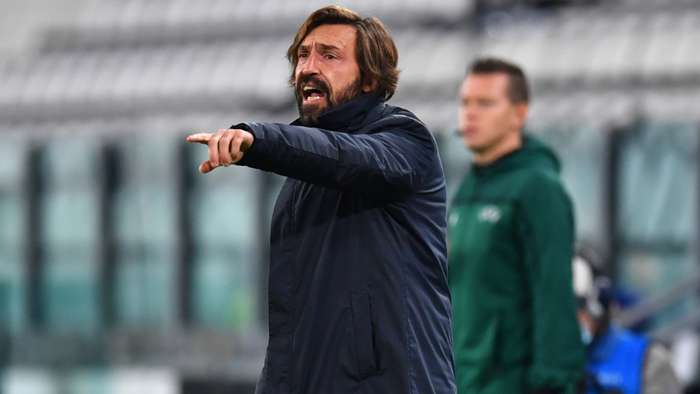 Andrea Pirlo insisted this season would not simply be a transition campaign for Juventus, saying he still wants to win.

Pirlo, who took charge in August, said while the Italian giants were rebuilding, he still wanted to win.

"No, it's a year in which we're building, but we want to try and reach results. I'm not here to build without winning," the Juve coach told his post-matchnews conference. "Maybe we will need a bit more time, but we have to know that results must come through a certain type of play style that maybe we are struggling to assimilate."

Goals from Ousmane Dembele and Lionel Messi either side of Merih Demiral's red card saw Barca to their win in Turin. Juve forward Alvaro Morata incredibly saw three strikes ruled out for offside.

The defeat was just Juventus' second home loss in their past 25 Champions League group-stage games.

Pirlo said the encounter showed just how much his team had to improve.

"We have to improve a lot in terms of attitude, in being good at playing this kind of game," he said.

"For many players it was one of those games they had never played, one of the first appearances in Champions League and therefore the difference in terms of personality and skill at playing this kind of game becomes visible.We will need this to improve in the future."

Pirlo's counterpart at Barcelona, Ronald Koeman, meanwhile praised what he thought was his side's most impressive performance of the season so far.

"This was our best game all season,"he told reporters. "This is a big win against an important Europeansideand we were able to play the football we're trying to impose.

"I wanted us to play with three at the back, pushing one man forward to have extrain the middle of the pitch. That meant we created a lot of goal chances and, frankly, I think we should have finished the match off much earlier.

"I'm very content with the football we played, with the result and especially with the character my team showed."