'I'm not political!' - Conte admits to lacking diplomacy as he aims to draw a line under Inter criticism 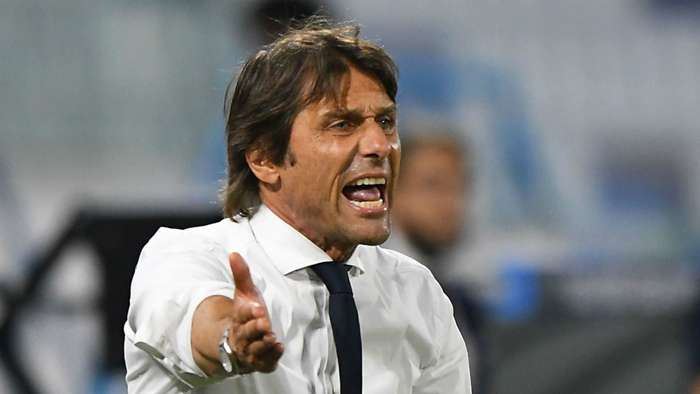 Antonio Conte insisted he is "not a political person" while admitting thathe is not "particularly diplomatic" as the Inter manager tried to draw a line under his criticism of the Nerazzurri board.

That led to speculation Conte's tenure could come to end after just a solitary season, with Massimiliano Allegri and Mauricio Pochettino emerging as reported targets to take over.

Conte later preached unity, though, and has engineered Inter's route to the Europa League final, which included a 5-0 battering of Shakhtar Donetsk in the last four on Monday.

Inter president Steven Zhang flew into Germany to be with the Serie A runners-up and Conte was asked if the situation has now been resolved.

"I don't feel like going back over certain situations. I felt some things at the time and felt the need to say it," he told Sky Sport Italia.

"What I say is always aimed at being constructive. The media likes to emphasise some situations more than others, but at the same time, I know we have to go through certain steps to become what Inter want to be in future.

"I am not a political person. I stick to facts and action, not being particularly diplomatic, but I try to be constructive and not to offend anyone."

Inter face Sevilla in Friday's final in Cologne as they aim to win a first trophy since 2011.

Conte expressed his delight after the Nerazzurri's semi-final triumph, while also discussing the challenge the La Liga giants will pose his side in the showpiece event.

"It's satisfying for everyone. The most important thing for me is that many lads are playing this type of game for the first time," said the Italian head coach.

"They are gaining experience at an important level in a tournament that Italy have not been protagonists in for a long time.

"Sevilla have a great deal of experience, I think they won it four times in the last six or seven years. However, we have enthusiasm, hunger and the desire to amaze people.

"Now we need to rest, recuperate and try to give some joy to the Inter fans, who I think will be proud of these lads, because they are giving their heart and soul.