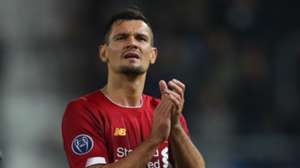 Dejan Lovren insists he is fully focused on Liverpool's title charge, despite ongoing speculation surrounding his future at Anfield.

Lovren has racked up 184 appearances in all competitions for Liverpool since joining the club from Southampton in 2014, but is now entering the final year of his contract.

It has been suggested that the Reds will look to cash in on the 30-year-old before he becomes a free agent, with Premier League rivals Arsenal reportedly among those keeping a close eye on his situation.

Liverpool are currently gearing up for the resumption of the English top-flight on June 17, as they aim to secure the six points they need to pick up a first league title in 30 years.

Despite the fact that Lovren has slipped down the squad pecking order under Jurgen Klopp in recent years, he is determined to prove his worth when the action gets back underway and add more silverware to his growing collection.

He told Sky Sports: "I'm always ready. If someone is injured and coming off, I'm ready to step in and show my quality. I think I proved that last season, when Joe Gomez or Joel Matip were injured and I came in and played.

"My goal is to play and to win as many trophies as possible. But at the moment the focus is just to win the next two games and be champions. After that, we will see what happens."

Lovren says that although he has been frustrated by a lack of regular minutes since Virgil van Dijk's arrival at Anfield, he has always respected Klopp's decisions and continued to work hard behind the scenes.

"It has been a test for me. But in these moments, I think you should stick with the team even more, to show your quality even if you are not on the pitch with the first XI," said the Croatian defender. "The next day in training, you should give everything, just to respect your team-mates.

"Of course, it's not the happiest moment when I see myself on the bench, but it's the decision of the manager. I respect it and I am always the guy who will work 200 per cent behind closed doors."

Lovren also addressed the criticism he has faced for a number of high profile errors during his time at Liverpool, claiming he doesn't pay much attention to comments from outsiders.

He said: "At this level, it's normal to be exposed to criticism. To be honest, I'm not too bothered. If I feel criticism, it will be first from the manager, but my biggest critic is me. I can see when I perform well or not, it's as simple as that. I don't need somebody to tell me. I don't read a lot of newspapers or listen much to the pundits.

"It is what it is. It's football and we have to deal with it. Some players can't do that and they go inside themselves, but accepting it is important. The criticism will just make me stronger. It has always been part of football and it always will be part of football."

Lovren added on Klopp being the inspiration behind Liverpool's transformation into Champions League winners and Premier League champions-elect: "He came in and said, 'Guys, I want you to think positively, to believe in yourselves. Without belief, we can't do anything.'

"We do not stop. Even when we are at our best level, he sees that we can improve more. He had a whole picture already in his mind, he just missed a few pieces. So he bought Alisson, he bought Virgil, then it just clicked. He has done an amazing job."