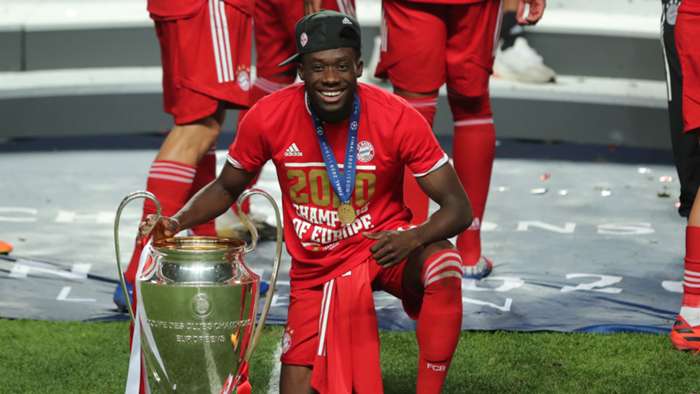 Bayern Munich left-back Alphonso Davies admits he never would have guessed he would become the first Canadian to win the Champions League.

The 19-year-old defender played the full 90 minutes as his German side defeated Paris Saint-Germain 1-0 in the final on Sunday.

It's been a breakout season for Davies, who only began playing for Bayern's first-team in 2019 after joining the club a year prior from MLS outfit Vancouver Whitecaps.

Already a regular for Canada's national team, the teenager wasted no time thanking hiscountry for their support as he savoured his surpriseChampions League triumph.

"I just want to say thank you guys for supporting me back home. This is for you guys," Davies said post-game.

"You know, who would have thought a guy from Canada playing at a club like Bayern Munich and winning the Champions League? I never could have guessed it.

"If someone told me this two years ago, I would've said you're lying but I mean dreams do come true and I just want to say thank you everyone for supporting me back home.

"Feels good, feels like I'm on top of the world. You know moments like these you dream of as a kid and I honestly can't believe it. As a footballer winning the Champions League is everything at club so you know I'm happy we can do it and I'm happy to be part of the squad that can do it as well.

"It's been a good season, we didn't start so well, but it's how you finish and not how you start. Throughout the season we had to build team chemistry...and to win the treble is an amazing feeling."

On match-winner Kingsley Coman, Davies added: "Kingsley, we knew he has pace, can play amazingly on his day and today he showed it. Every time one-on-one he went at the defender, did well and his goal, you don't really see Kingsley scoring headers, but that just goes to show you that guy is full of surprises."

The young Canadian also paid tribute to managerHansi Flick, who replaced Niko Kovac earlier in the season and has now lead the club to a sixth Champions League crown.