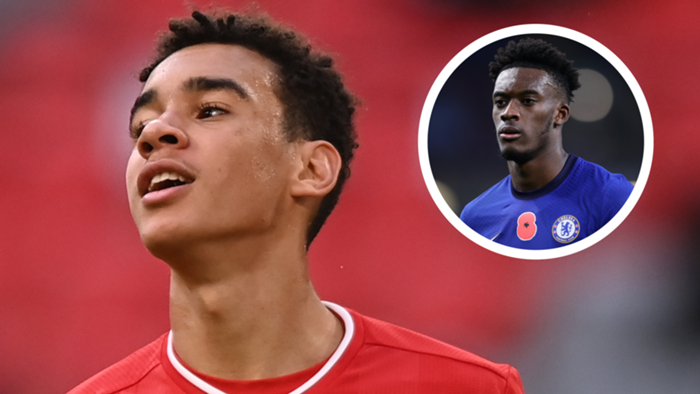 Callum Hudson-Odoi is trying to sway Jamal Musiala to choose England over Germanyafter the pair lined up together again with England's Under-21 team.

Musiala was born in the German city of Stuttgart but grew up in England, making him eligible for the two countries. His father also holds a Nigerian passportso he is also able to play for the Super Eagles if he so chooses.

But even the DFB (German Football Association) concede that England are most likely to convince the wonderkid to play for them after seeing himdebut and score for Aidy Boothroyd's side over the international break.

Still,Musiala can change his mind until he makes his senior debut in a competitive matchfor any country,and Hudson-Odoi has offered his opinion to his fellow young star.

"We talked about it. I said he should be staying with England," Hudson-Odoi said after the pair both scored in the 5-0 win over Albania. "He knows a lot of the boys already and has been really welcomed into the team.

"I said to him, 'I can't choose for you but it would be nice if you stayed with England.' Hopefully he gets to the seniors as quickly as possible."

The excitement over Musiala's talent is highlighted by two records broken at Bayern, with the 17-year-old havingbecoming the club's youngest Bundesliga appearance-maker and goalscorer in recent months.

After signing Musiala, Bayern have had several attempts to sign Hudson-Odoi rejected by Chelsea. Hudson-Odoi spoke of being reunited with Musiala for his country after the clubs failed to do business in the summer once again.

"Jamal is a top, top player. I have known him from young, when he was at Chelsea," he continued. "He is a great player and I've watched him for a while. He went to the same school as me as well.

"On day one, I wanted to welcome him to the U21s as soon as possible. He is a good guy, very shy, and before the game I wanted to see he was feeling himself and confident and not scared or shy. I said, 'Play your own game and get a goal for yourself,'which he did.

"I was really happy for him. I have always said to him, 'Keep doing your thing day in, day out, and you will get to the seniors sooner rather than later.'

"Wherever he is I will be watching him and seeing he is doing himself proud."