I want to be part-Ronaldo, part-Neymar - NXGN star Talles Magno on his route to becoming one of the best 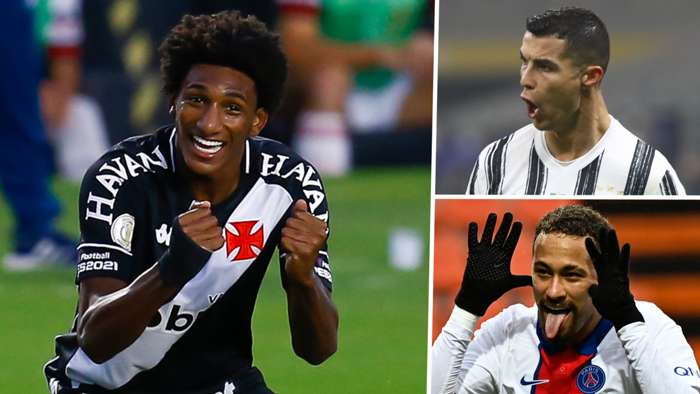 Brazilian starlet Talles Magno has revealed the traits he wants to take from stars such as Cristiano Ronaldo and Neymar as he develops his own game towards becoming "one of the best" players in the world.

The 18-year-oldforward has grown into one of the young stars of South American footballing, having enjoyed a breakout season for Vasco da Gama in 2019.

Though injuries held back his progress in 2020, Talles –who has been linked with both Liverpool and Real Madrid – is now looking forward as he aims to learn from the games modern icons.

Speaking exclusively toGoalafter being named on the 2021 NXGN list of the best 50 footballing wonderkids, Talles said: "I want to be as driven as Cristiano Ronaldo. He isan outstanding professional.

"But I also want tohave the joy of playing that Neymar has. He inspires me a lot with his game.

"Fenomeno (Ronaldo Nazario) also inspires me a lot, as does Romario."

Having joined Vasco at the age of nine, Talles progressed rapidly through the youth-team set-upbefore making his seniordebut as a 16-year-old in June 2019.

Labelledby then-Vasco manager and former Real Madrid boss Vanderlei Luxemburgo as "an artist", Talles made an immediate impact, and even managed to go viral on the final day of the 2019 campaign when producing a rainbow flick over the head of Fortaleza defender Gabriel Dias.

Such flicks and tricks made him a marked man, and he admits he has been forced to adapt his game over the past year.

"As a person, I’d say nothing has changed really," he said when asked what is different now from when he first joined the senior ranks."I’m still that smiling, happy boy; a humble boy, who’s always trying to help people and his family.

"Professionally, the responsibility of representing this club has increased, as I didn’t have it when I was first promoted to the pros. It has grown bigger, but I see it as a healthy responsibility.I’m 18 and have been given the chance toplay for Vasco.

"Now, defenders mark me more tightly, because people know me better, and I have this trait that I’m being convinced to drop [by the coaches].

"Last season, I liked to get the ball in the middle of the pitch, and I still try it sometimes. But now I have three, four players all over me, and I can’t dribble past them.

"I’m trying to adapt to this new style of play by gettingcloser to the byline so that I can createone-on-ones and have better chances to do what I like to do best: dribble, assist my team-mates and score."

While Talles aims to develop his game, he was forced to spend time on the sidelines after picking up hamstring and foot injuries over the course of a 2020 season that saw Vascos 110-year top-flight run ended by relegation from Serie A.

"It was one of the toughest situations in my life," he admitted."I’ve had some hard times in my childhood, yes, but I’ve never faced something like that in football.

"I’ve had some criticism, but tried to focus on my recovery. Now, I have the chance to bring back that joy after these hardships.

"I’m a young guy who’s constantly following social media, so seeing things [being said]there was tough. But I’ve learned to pay less attention to it."

As well as the aforementioned links to Liverpool and Madrid, Talles is also reportedly a target for Lazio, Roma, Sevilla and Bayer Leverkusen, with a move to Europe now seen as his inevitable next step for a player tipped for an international call-upfurtherdown the line.

"I think every player dreams of this, of representing the Selecao andplaying for the biggest teams abroad," the Under-17 World Cup winner said.

"But I have to focus on where I am right now andgiving my best, because I know I have to do much more on the pitch. Im improving every day, but I do dream of playing abroad."

He added: "Istill want to be this positive player, who aims to be a top player, and someone who represents Vascoas they win many titles, while evolving every day and enjoying 100 per cent of my time as a footballer.

"I’ll strive to be one of the best. The competition is tough, and I have to grab every chance to grow that comes my way, wherever I go."