'I was told if I didn't slow down, I might not play football again' - Chelsea star Kirby relishing WSL return after nine months out 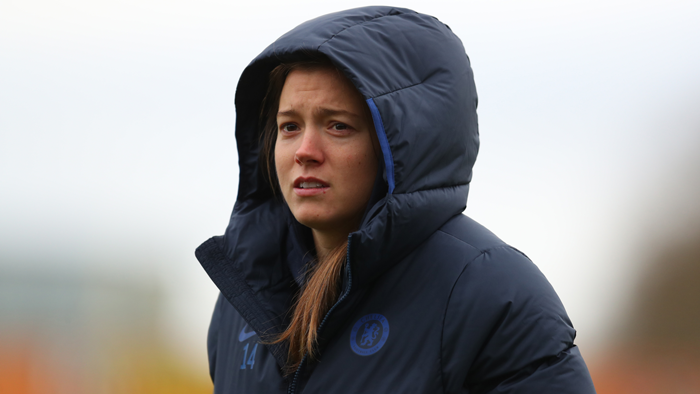 Last time Fran Kirby played in the Women’s Super League, Manchester United were the opponents. That was November of last year.

The England international had been on the pitch just two minutes when her tricky feet earned Chelsea a penalty that won them the game, but that would be the last we would see of the nimble attacker for the best part of nine months.

In February this year, Chelsea announced the reason behind Kirby's absence. After being absent for four months, the club revealed that Kirby was not suffering with a football injury of any sort, but with pericarditis, which is the swelling and irritation of the thin membrane surrounding the heart.

“I remember, I was reading about the illness, because I had no idea what it was when I got diagnosed with it, and I never read about one story where someone had overcome it,” Kirby explains.

“I wanted to show to myself that I could get over this and I had a positive story to give after this illness after reading the negative ones.”

Kirby returned to competitive action last weekend as one of the star players in Chelsea’s 2-0 win over Manchester City in the Community Shield.

It was a delight for fans of any team to see the 27-year-old put on such a fantastic performance after so long out, with Kirby crediting all those around her for helping her be in such a good place as the season returns.

However, there are few people she is more grateful for than Emma Hayes, her manager.

“I wanted at the beginning for my illness to be very private. I just wanted to focus on getting better, not have to answer questions about it and just kind of focus on making myself well again.

“Obviously, I started to feel better and that’s when we put out the statement regarding my illness.

“Emma was the one that was questioning the doctor all the time, ‘Can we try this? Can we try that?’ She was always the one trying to find the answers and trying to help and it just meant so much to me as a player.

“She’s great with everyone, it’s not just a case of she was looking out for me because I was ill, she’ll make sure that she has time for every player and I think that’s really important.

“She was always checking in on me, always asking how I was, when I wasn’t feeling great I could just go into her office and just cry in front of her and not feel embarrassed about it. I don’t think I could’ve asked for anyone better.

“As was the doctor at Chelsea – incredible. My team-mates were amazing. They’ve probably seen me looking extremely, extremely vulnerable and very poorly for a long time and they still managed to tell me, ‘You look better today! You look like you’re doing alright today’. I’d look in the mirror and be like, ‘They’re lying! But it’s fine’.

“I think for me, everyone has been incredible. I’ll never not be grateful for what people have done for me these last few months and Emma is probably – definitely – the top of that list, 100 per cent.”

Kirby not only says her team's success on the pitch motivated her the most during her recovery, but she also describes herself as becoming a huge fan during that time – with goalkeeper Ann-Katrin Berger her favourite player. But nowshe’s back on the pitch herself and ready to help Chelsea defend their WSL title.

“I haven’t really focused on anyone else, especially in these last few months,” Kirby adds.

“I’ve just been entirely focused on myself and how I can improve, how I can be better.

“I had a conversation with Alex Scott actually a few months ago on her Instagram. I said, ‘For me, I’m going to be doing everything, every single day to be the best version of myself’. That’s one thing that I’ve really stuck to and really put a lot of time and effort into it.

“Now, after everything that I’ve been through, I just see it as an opportunity now to go out there and play my best football, enjoy it, enjoy the moment of being able to play.

“There was a period where I was told by the cardiologist that if I don’t slow down, I could become chronic and not play again.