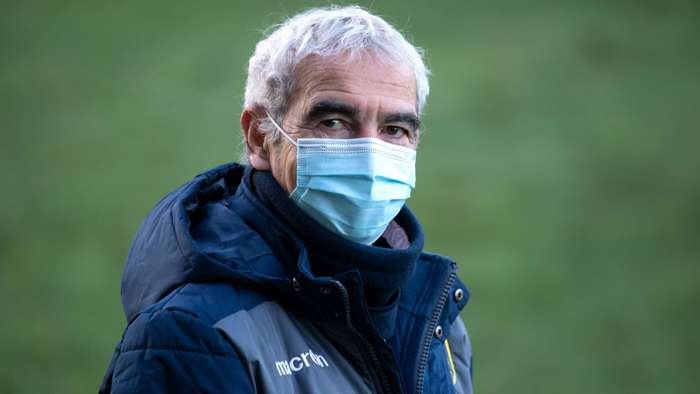 He has shown he has lost none of his flair for a soundbite, though.

Speaking in a press conference, he was asked for his reaction to missing out on Lyon midfielder Jean Lucas on loan, with the Brazilian going to Brest when he seemed destined for Nantes.

“I didn’t follow the ups and down of the deal but he’s now in Brest and that’s how it is,” he reflected to the media. “I would like to have signed Maradona, but he’s dead. That’s how it is.”

“He’s got real potential,” Domenech said. “It’s interesting. He’s coming back. I haven’t made any decision but we’ll speak in a few days.”

Domenech is remembered infamously in France for his bizarre outbursts and strange selection decisions while in charge of the national team.

In 2007, after Jose Mourinho had accused him of treating midfielder Claude Makelele “like a slave”, Domenech hit back: “As long as he can walk, he will play. I have the right to pick him.”

His demise arrived in 2010, when Nicolas Anelka delivered an expletive-ridden tirade at him during the half-time interval of a 2-0 defeat to Mexico at the World Cup. In protest at Anelka being subsequently sent homethe following day, the rest of the squad refused to train in full view of the world’s media.

Les Bleus finished bottom of their group with just a single point, beaten 2-1 by the host nation in their final game. Domenech’s reign finished with the indignity of him trudging past South Africa coach Carlos Alberto Parreira without shaking hands.