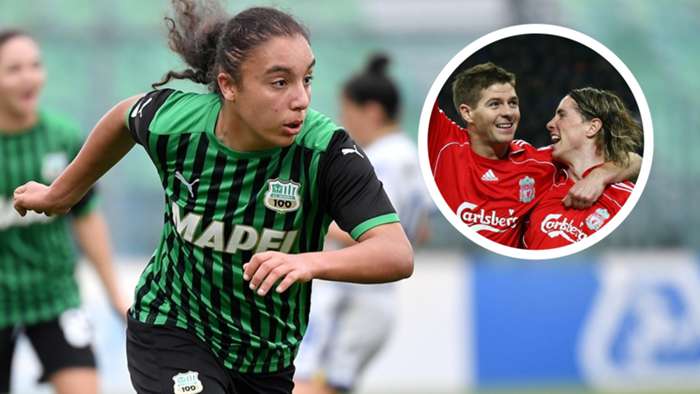 Sassuolo’s teenage sensation Haley Bugeja says Liverpool legends Steven Gerrard and Fernando Torres were the players who inspired her as a young girl.

The 16-year-old, who was named at No.8 in this year’s women’s NXGN list,hassettled into life in Italy brilliantly this season, scoring six goals in her first seven Serie A games.

It is no surprise to hear, then, that her role models growing up were prolific goal-scorers themselves.

Speaking in an exclusive interview with Goal, Bugeja says: “Ive always supported Liverpool. It was not really my choice, but my family supports Liverpool so I grew into it.

“When I was growing up, I would always watch Steven Gerrard, he was the Liverpool captain, and Fernando Torres. They would always be scoring goal after goal, week after week.

“For me, I always had this thing that I wanted to score goals, for some reason. It was always a passion for me. Just seeing them made me want to do the same things that they were.

“I would definitely admire their passion and the way they played,” the Malta international adds. “I felt like at that time, growing up, I would see themscoring a goal and touching the badge.

“I would see the passion on their face after scoring -it was like the best feeling ever. I wanted to do that. I wanted to get to higher levels. I wanted to just do it myself really.

“Im glad that Im finally at a stage where I can really just focus on my overall improvement, and just really push [on]. Im at a club I really love and admire. That helps me a lot and everything is falling into place right now.”

After a trial with Sassuolo two years ago, Bugeja was offered a contract by the club when she turned 16.

“I didnt have any doubts if I wanted to go or not,” she says. “I just signed it immediately.”

On her debut for the Italian side, she scored a sensational solo goal that quickly went viral, dribbling past four players before arrowing a left-footed shot into the bottom corner. Later in the game, she got her second, a lovely curling effort with her right-foot.

“The first thing I did was I entered the dressing room, I called my family,” the teenager recalls. “Then, as soon as I cut the call, I just was going to go on Facebook and before I clicked on it, it said 99 plus notifications. I was like, Oh my god.”

Those two goals are not the only reason she has received attention this season. As well as the four that followed in the next six domestic games, Bugeja also made history with Malta in November.

A hat-trick against Georgia did notonly secure her nation’s first ever away win in a UEFA qualifier, but it made her the youngest player ever to score three goals in a game at that level, breaking a record set by Scotland’s Julie Fleeting back in 1997 – before Bugeja was even born.

“It was up there with one of the most special moments of my life,” the Sassuolo forward says.

“I feel like Ive been so blessed to experience so many things at such a young age. To know that at 16 just gives me a whole view about what I can achieve in my future, although that will only happen if I continue to work hard like I am now andkeep my feet grounded.”