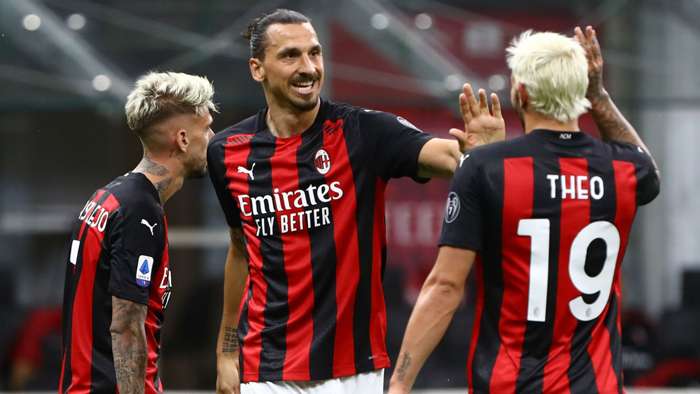 The records just keep on tumbling for Zlatan Ibrahimovic, who reached double figures for the Serie A season with his latest strike for AC Milan on Saturday.

In the process Ibrahimovic passed 50 league goals for Milan with his double against Sampdoria in July, making him the only man to reach a half-century for both the Rossoneri and Inter.

And after netting for his club against Cagliari at the weekend the Sweden legend can now boast another little piece of Serie A history.

His 55th-minute strike was his 10th league goal since rejoining Milan in January, making him the oldest player to reach double figures in a single campaign in history at 38 years and 302 days.

Ibrahimovic takes the record from Lazio, Torino, Juventus and Italy idol Silvio Piola, who was 38 years and 127 days old when he achieved the feat for Novara in the early 1950s.

Milan went on to win 3-0 at San Siro, with Ibrahimovic adding to former Liverpool defenderRagnar Klavan's first-half own goal and Samu Castillejo subsequently rounding off a routine victory.

The Rossoneri thereby finished the 2019-20 season in sixth place, having taken 66 points from their 38 fixtures over the course of the interrupted campaign.

The veteran has had a huge impact on Milan since arriving in the new year, leading the club from mid-table to the Europa League.

His future, however, remains uncertain, with his short-term deal due to expire after the Cagliari clash.

"I hope that tomorrow will not be Ibrahimovic's last game for Milan," coach Stefano Pioli told reporters when questioned over Ibrahimovic prior to the clash.

As for the player himself, he is in no doubt that he can continue to shine, be it at Milan or elsewhere.