Icardi: An honour to play with Neymar & Mbappe at PSG 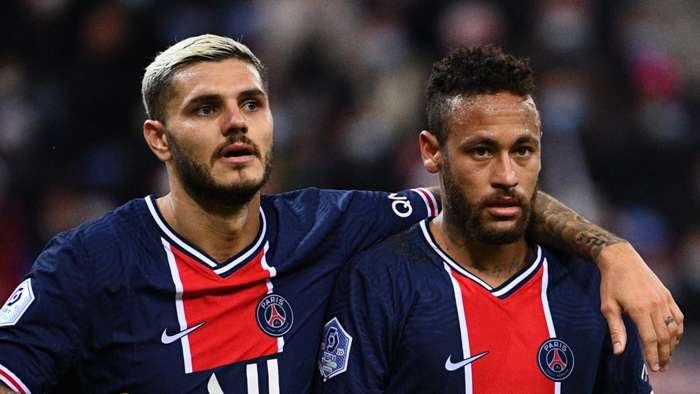 Mauro Icardi has said he feels honoured to play alongside forwards of the stature of Neymar and Kylian Mbappe.

Paris Saint-Germain have attacking options that are the envy of the world, with Icardi, Neymar, Mbappe, Moise Kean and Angel Di Maria at the disposal of coach Thomas Tuchel.

Icardi is not a guaranteed starter, whereas Neymar and Mbappe are certainties to feature in Tuchel’s best XI when fit, but there is no jealousy from the Argentina international.

Instead, the 27-year-old has spoken in glowing terms of two of the world’s best attacking talents.

“For me, playing with attackers of this level is an honour,” Icardi told Telefoot. “Kylian and Neymar are among the three or four best players in the world - they show it in every game.”

Icardi numbers Sampdoria and Inter on his list of former clubs, but he claims the level of the squad in Paris is superior to any he has been involved in before.

“I've been in football for many years now,” he said. “This squad that was formed last season, I have not seen it anywhere else.”

PSG suffered heartbreak last season when they fell to a 1-0 loss to Bayern Munich in the final of the UEFA Champions League.

Icardi has confirmed that the aim is once again to become the dominant force in European football.

He said: “What everyone is looking for at the club is to create a competitive team to win our first UCL. That's what we all think; what we all expect.”

PSG return to Champions League action with a home game against RB Leipzig on Tuesday.

The meeting with the German side is arguably a must-win encounter for PSG as Tuchel’s side are third in Group H, with just one win to their name from a trio of games.

They were beaten at home by Manchester United and in Leipzig and another defeat could potentially see them six points adrift of the top two spots with only a pair of games remaining.