In Southgate's shoes: How would England line-up under the Premier League's best coaches? 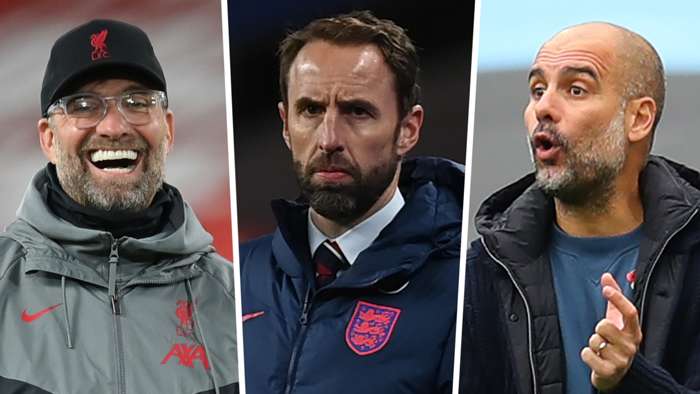 For now, the Three Lions' manager is sticking with a 3-4-2-1 formation that looks roughly suitable for tournament football but does not leave room for his creative wingers.

All in all, Southgate’s England have never looked so tactically unsure of themselves.

The Premier League, meanwhile, is notshort of decisive tacticians, many of whom – in direct contrast to Southgate - have a distinct style of play and use a consistent formation.

So, with that in mind,Goalhas taken a look at what five of the most astute tactical minds in the English top-flight would do if they were in Southgate's shoes...

With one inverted full-back and one bombing forward, Guardiola found balance through territorial dominance and beautifully choreographed passing moves that were drilled into muscle memory.

He would no doubt be an adventurous England manager, kick-starting a revolution by promoting the young crop of technically-gifted players to senior positions.

Bukayo Saka, an intelligent and adaptable footballer, holds a crucial role as an inverted left-back, mimicking his deployment under Mikel Arteta by moving into central midfield.

This allows Guardiola to go all-in on Phil Foden and Jack Grealish, the playmakers and poster boys of the Guardiola era.

Harry Kane excels as a classic Guardiola false nine, while Raheem Sterling continues his usual Man City role and Jadon Sancho dances around from the right, pressing hard and adding a maverick energy not dissimilar to how Riyad Mahrez plays at the Etihad Stadium.

With Sancho tucking in, Trent Alexander-Arnold provides the width, whileHarry Maguire and Joe Gomez providesafety and consistency in a problem area for Guardiola.

The City manager likes calm at the back, which means Jordan Pickford gives way to Dean Henderson.

Klopp is no less adventurous, expansive, or possession-focused than Guardiola, but there are large differences between the managers.

His Liverpool play an aggressive pressing game in a narrow 4-3-3, with the front three alternating dropping into the half-spaces to run the game. This pulls the opposition infield, making space for those marauding full-backs, while their three-man midfield is more functional than creative.

The front three virtually picks itself. With Kane dropping and linking like Roberto Firmino,Sterling andSancho buzz around on either side of the England captain and look to dribble into the penalty area.

Klopp needs his midfielders to be hard-working, intelligent, and confident playing high-tempo short passes under pressure.

Jordan Henderson occupies the deepest of the three roles, mainly because he is the most trustworthy (and Declan Rice lacks the agility needed to play at Klopp’s pace), whileSaka completes his conversion into a Georginio Wijnaldum-esquemidfielder.

James Ward-Prowse, reborn under Ralph Hasenhuttl at Southampton this season as an all-action midfielder, offers the sort of dynamism Klopp requires, and alongside Saka forges a tireless partnership capable of feeding a rapid front three.

Mourinho’s tactical style is well-suited to international football. He is a risk-averse manager who aims to frustrate the opposition by sitting back rather than pressing, launching counterattacks in behind after conceding the majority of possession.

He sits his players in an ultra-compressed midblock, using six out-and-out defensive players in a 4-3-3 formation while offeringthe forwards licence toimprovise on the break.

As England manager he builds a solid foundation of Pickford (the embittered Mourinho-style leader at the back), conservative full-back pair Kieran Trippier and Kyle Walker, and powerful no-nonsense centre-backs Maguire and Tyrone Mings.

Mourinho wants disciplined players and he loves a teacher’s pet, so Mason Mount and Jordan Henderson can provide the hard work needed to be busy in front ofRice - an easy choice for the Nemanja Matic role.

While Mourinho used to make room for a number 10 – such as Deco, Mesut Ozil, or Frank Lampard – he has become more defensive with age, and now that playmaker is shunted out to the right wing.

Grealish, then, is a surprise choice to support Kane and Marcus Rashford, with the Aston Villa man deployed like Angel di Maria or Samuel Eto’o in previous Mourinho teams.

Rashford, having learnt defensive diligence under Mourinho in the past, is preferred toSterling for the Son Heung-minrunning-in-behind role.

Bielsa plays furiously aggressive vertical football, using an ultra-fluid 4-1-4-1 that moves into a 3-3-1-3 when in possession.

The idea is to cut passes through the lines as quickly as possible, with multiple players making lung-busting runs behind the opposition defence in a wild, confrontational approach.

Bielsa overloads the flanks, emptying central midfield in the process, and relies on a high volume of positional switches as players invariably look to receive the ball on the go. It is never static, and never sideways.

A unique manager deserves a unique line-up, and it would not be a Bielsa team without a few surprise selections.

Alexander-Arnold andChilwell pile forward whenever possible as Kalvin Phillips helps out at the back, pinging long balls into the channels and generally dictatingplay.

James Maddison quickly becomes a favourite for his ability to pick up the ball on the half-turn and play vertical passes, a skill he was taught by Brendan Rodgers.

Jordan Henderson, meanwhile, gets the nod for his leadership, althoughWard-Prowse and Foden are banging on the door.

Grealish and Sancho start as Bielsa’s wingers mainly because they are both capable of cutting infield and filling in as central midfielders, whereas Rashford and Sterling are less adaptable.

Dyche’s Burnley side are more tactically flexible than many give them credit for, and their attacking interplay is more measured than simply hoofing it long to a big man, but nevertheless they regularly record the lowest possession in the Premier League, the most long balls, and the most headers.

Perhaps his safety-first, direct football is out of necessity, and Dyche would open up more if he was England manager, but we can only go on what we have seen– and Dyche is the heir-apparent to the Sam Allardyce-era that never was.

They are supported by powerful midfield stoppers Jordan Henderson and Rice, with Ward-Prowse coming into midfield off the right as the hard-workingRashford leads the counters down the left, mimicking how Jeff Hendrickcovered for for Dwight McNeil at Turf Moor last season.