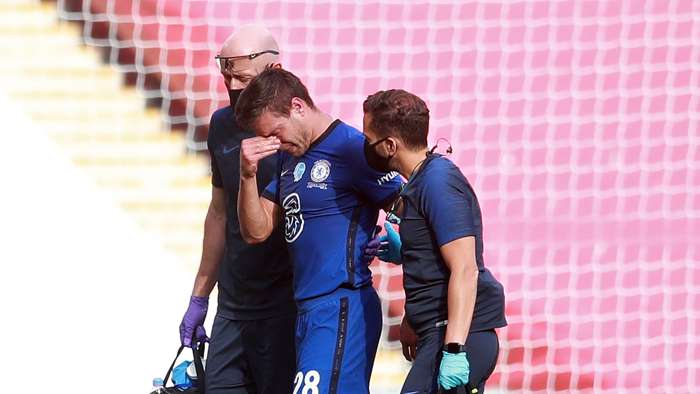 And Pulisic, the scorer of Chelsea's early opener at Wembley, also made way four minutes into the second halfwith an identical issue sustained as he was charging through on goal.

Pedro then suffered a suspected dislocated shoulder late on and Frank Lampard has all butruled the trio out of next Saturday's last-16 second leg with Bayern, which Chelsea will start trailing 3-0 on aggregate.

"I don't know the full extent of the injuries, but I know its the hamstrings with Azpi and Christian," he said at his post-match news conference.

"They have to be scanned and assessed over the next few days. They clearly won't be fit for next week."

Pedro, who was given oxygen as he was stretchered off the field, is expected to join Roma on a free transfer when his Chelsea contract expires later this month.

"I believe it could be a dislocated shoulder but don't go too soon on that," Lampard said when asked for an update on the forward's condition.

"I've not seen him yet as he was whisked away so it's a disappointing end as that's probably going to be his last game for Chelsea.

"He's been an incredible servant and I'm disappointed for him."

Chelsea got off to a flyer through Pulisic's fifth-minute strike but Aubameyang added to his penalty with an impressive second to take Arsenal's record tally of triumphs in the competition to 14.

The Blues' hopes of scoring an equaliser were dented by a controversial second yellow card shown to Mateo Kovacic for a challenge on Granit Xhaka.

Replays showed Kovacic barely made contact with his opponentand Lampard questioned referee Anthony Taylor's decision to reach into his back pocket but conceded the Gunners did deserve their spot-kick.