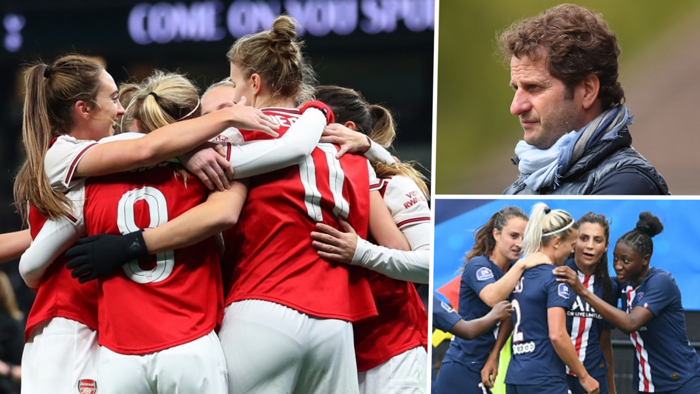 Plenty has changed since the Gunners first started preparing for this game. With all the remaining UWCL games reduced to one-legged ties, all behind closed doors and at neutral grounds in Spain - atAthletic Club's San Mames and Real Sociedad'sAnoeta Stadium -it’s completely changed the way that Arsenal have been preparing for it, too.

Add inthe protocols in place due to the impact of Covid-19 and the fact that Joe Montemurro’s team are not in the middle of their season like they should have been, and it’s a completely different game.

“It is already very different to what we're used to,” Arsenal captain Kim Little admits, with the squad to fly out to Spainon Thursday, ahead of Saturday's fixture.

“There area lot more protocols, testing and rules that we have to adhere to, but I think we've all adapted to them pretty well.

“As humans you just adapt and change with the way things need to be.

“We have played friendly matches behind closed doors. We actually played at Villa Park a couple of weeks ago against Aston Villa and that was in a stadium obviously with no fans there.”

The change from two-legged ties to just one-off matches has changed even the way they’ve played those friendlies, too.

“Penalties have been a different way we've been finishing our pre-season games,” Little explains.

“Regardless of the result, we've been taking penalty shootouts to prepare ourselves for the situation that could very much occur in the knockout stages because of the format.

“The Champions League has always been home and away, within the season. When you're in European competition, it is quite a nice change to just the domestic season.

“But I think for this circumstance, we get to finish last year's Champions League, which is what we all wanted, and with it being the start of the season and the first competitive game back, I think it's a great way to start to be honest.

“I'm looking forward to a lot more pressure on one game and one situation.”

For all of Arsenal’s quality though, the big games have not gone their way over the last 12 months.

The last game they played before football was suspended saw them lose the Continental Cup final to Chelsea – the club they also conceded their FA Women’s Super League (WSL) crown to.

In the WSL this season, they fell 2-1 to Manchester City in February, were hammered 4-1 by Chelsea on their own patch in January and lost 2-1 to the Blues at the end of last year. Their only win against their fellow title challengers came back in October when they beat City 2-1 at home.

“I think you can see even over the past couple of years, when we've come up against Chelsea, Manchester City, these kind of tougher opponents, we've, more times than not, not succeeded or not won the games the way we wanted to,” Little admits.

“It’s definitely something Joe has actually brought up, about these pressure moments and what we can do to come out of those games on top.

“Ultimately, those are the games that either win you a league or make you go through in the Champions League, so it's definitely something we're aware of and trying to improve.”

Saturday would be a great time to start turning things around. Arsenal finished third in the WSL when it was concluded on points-per-game in June, meaning they do not qualify for the Champions League next season.

There is, however, one way they can change that: by winning it this month.

“I think you have to make the most of your time in this competition,” Little says.

“It doesn't come around too often in your career to play these kinds of games, especially with how competitive the league is in England. There areseveral teams that have the opportunity to push for those top two spots.