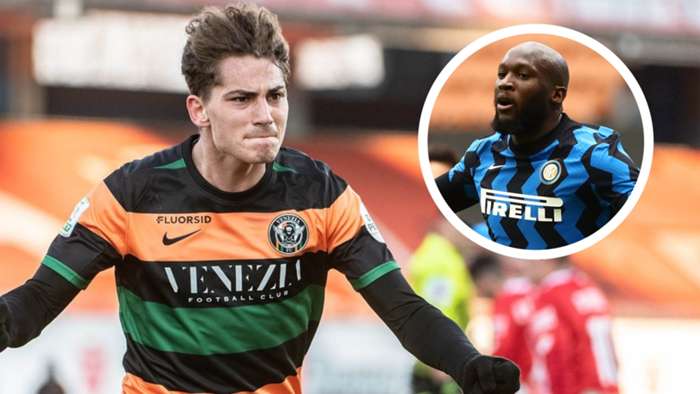 Teenage Inter striker Sebastiano Esposito has opened up on the special relationship he holds with team-mate Romelu Lukaku, and how he has continued to be advised by the Belgium international while out on loan this season.

Esposito is currently plying his trade in Serie B with Venezia having spent the first half of the campaign on loan at SPAL, with many in Italy believing that the 18-year-old will become a leading light for the Azzurri down the line.

And while he has not always shown his best form during his time in the second tier this term, Esposito is keen to keep learning, and is leaning on Lukaku for inspiration.

Speaking exclusively toGoalafter being named on the 2021 NXGN list of the worlds top teenage footballers, Esposito said of Lukaku: "He never had the difficulties I had this year,primarilybecause he is a champion and because he grew up abroad,where there are not the same difficulties facing young players when it comes tobreaking through.

"He always gives me many tips, even withoff-the-pitch stuff. We write to each other often."

Lukaku and Esposito have held a strong bond since Esposito began training with the Inter first team in 2019, with the ex-Manchester United striker having played a key role in the youngster opening his senior account in front of goal.

In December 2019, with the Nerazzurri 2-0 up on Genoa midway through the second half, Lukaku handed penalty-taking duties over to Esposito on the day he had already become the youngest Inter player to start in Serie A since the turn of the century.

Esposito slotted home from the spot for what was certainly the highlight of his career thus far.

"Me, a 17-year-old boy, who is cheered by the fans for taking the penalty after beingpassed the ball by one of the strongest strikers in the world: I think it wasa unique emotion," he recalls.

"At that moment I couldnt think, and I think that helped. If I had to take that penalty now and being a little more conscious of what was happening, I would think about it 10times more."

Brescia were the first professional club to take a chance on Esposito, signing him as a nine-year-old after he impressed for local amateur side Club Napoli.

Two years later, he was signed by Inter along with his brother, Salvatore, and he quickly began making an impact on their various youth sides.

During the course of the 2018-19 season, he scored 31 goals in 37 games across the Under-17 and U19 sides, and was rewarded with a first-team debut against Eintracht Frankfurt in the Europa League towards the end of the campaign.

That saw him become the youngest player to ever represent the San Siro outfit in continental competition, but he has made just 14 senior appearances since, and he feels those lack of opportunities are symptomatic of Italian football when compared with Europes other top leagues.

"I hope that we will get there (to the level of trust that other countries show)," he said. "We young people always work every day, but not always everyone has an opportunity.

"In recent seasons, there have certainly been improvements compared to previous ones and there have been more opportunities.

"But we are behind other countries, where at my age players already have 100 appearances with the first team."

With Lukaku, Lautaro Martinez and Alexis Sanchez ahead of him in the pecking order at San Siro, Esposito was sent out on loan to SPAL at the start of the campaign, but managed just one goal in 13 appearances for the recently-relegated outfit.

His deal was cut short in January, and he has since fared better with promotion-chasing Venezia, for whom he scored his first goal in the 4-1 win over Monza before the current international break.

"The gap between Serie A and Serie B this year is not so big,because there are so many quality players in Serie B," he said of his struggles in front of goal.

"The difference, however, is still there. It cannot be hidden that in Serie A there are monsters,champions on another level, and the fact that there are these phenomena is good for Italian football.

"But, unfortunately,there are few young Italians in that group."

As Esposito looks to fire Venezia back to Serie A, his parent club are seemingly on the verge of breaking Juventus stranglehold on the Scudetto, with Inter currently six points clear at the top of the table while having a game in hand on second-placed AC Milan.

With Lukaku and Lautaros partnership having gone from strength to strength, the chances of Esposito breaking into the first team remain slim, and as such his future past the end of the current campaign remains unclear, despite him being under contract until 2025.

Paris Saint-Germain and Liverpool have both previously shown an interest in a player who, among other things, has been noted for his set-piece ability, but right now Esposito is just focusing on seeing out the season in the best way possible.

"Im sorry not to be there (for a potential title win),but I think that together with Inter we have made the right choice for me to develop," he admitted.

"We have embarked on this path, thoughI do not know how long it will last. It could be foronly another three months, another year or another three years.

"In June, we will see. We will sit down at a table and we will evaluate what is best for my future.

"I know that Im not the first, nor will I be the last to go down to Serie Bhaving played in Serie A. But I want to go back to where I started, even if I know its difficult."