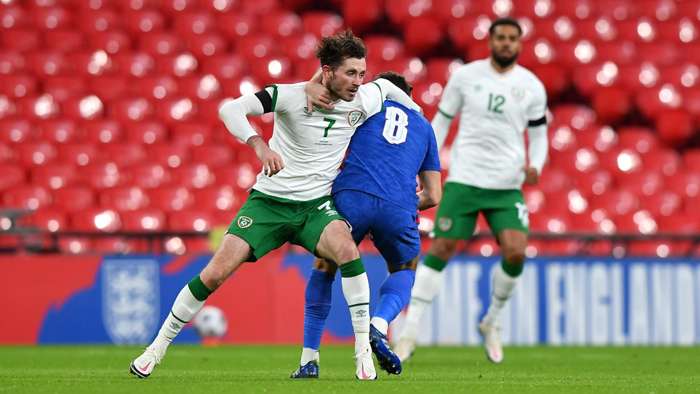 Republic of Ireland midfielder Alan Browne has tested positive for coronavirus after playing the full 90 minutes against England on Thursday.

Testing since that match has revealed the Preston North End man has contracted Covid-19, however.

Browne, who contested a game-high 13 duels, has had "no close contacts", FA Ireland reported on Friday.

"The rest of the staff and squad tested negative ahead of Sunday's UEFA Nations League game against Wales in Cardiff," a short statement read on Twitter.

While Ireland visit Wales then host Bulgaria in the Nations League, England go to Belgium before playing Iceland at Wembley.

The Iceland fixture had been in some doubt due to the visitors' prior match in Denmark, where a latest coronavirus outbreak has led to tightening of travel restrictions, but Iceland were granted exemption on Thursday, allowing the game to go ahead.

It has cast a shadow on a good night for England, who controlled the game against their neighbours, who stepped in as late opposition following New Zealand's withdrawal from the friendly fixture, due to coronavirus concerns, last month.

One of the brightest sparks was Jack Grealish, who played for Ireland at youth international level before switching allegiances to England.

Grealish was the architect of England's second goal as he playedJadon Sancho into the box with a perfectly weighted pass right on the half-hour mark, before theBorussia Dortmundwinger cut onto his right foot and fired into the far corner of the net.

Former Ireland midfielder Roy Keane said of Grealish :“We are always questioning about his end product, that has improved over the last six months. It was a cushy night for him. It was his second start, this guy is going on to great things, no doubt in my mind.