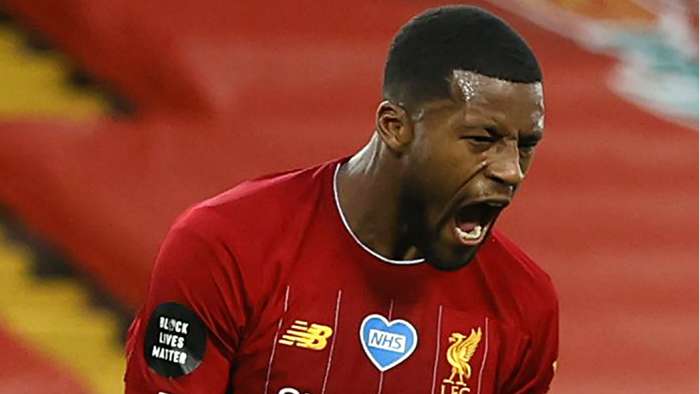 Jurgen Klopp refused to be drawn over Georginio Wijnaldum's futureat Liverpool, insisting the situation is "all good" amid speculation the midfielder is a transfer target for Barcelona.

The Netherlands international was also influential during the Reds' Champions League success in 2019, though has now entered the final year of his contract at Anfield.

Media reports have linked the player with Barca, where his former national team boss Ronald Koeman is in charge, but Klopp was unwilling to discuss the matter in detail on Friday.

Speaking in his pre-match press conference ahead of the Community Shield against Arsenal, the Liverpool boss said:"That'san open contract situation, otherwise we would know.

"It'sall between us and the player,these kind of things. It'sall goodat the moment, all fine. Gini played very well in pre-season and has obviously had a couple of good seasons for us.That'sall I can say about that."

The reigning champions may have lined up reinforcements in midfield, however,if rumours of a move for Thiago Alcantara are to be believed.

The Spaniard helped Bayern Munich achieve the treble but has made clear his desire to move on for a new challenge, though the financial impact of the coronavirus pandemic could restrict the amount of business Liverpool do during thistransfer window.

"I don'tknow, I don't know what will happen. There'sa long time to go until October 6 when the window closes," Klopp replied when asked about potential new signings in general. "I think the philosophy of this club ispretty clear. We will see how much we can, or how much we wantto spend, allthese kind of things."

The emergence of Rhian Brewster, who scored twice in the pre-season friendly against Salzburg this week, could negate the need to add further firepower up front.

Alternatively, the 20-year-old forward could be sent out on loan again, as was the case in the previous season when he had a temporary spell in the Championship with Swansea City.

"Wehave tosee what will happen in the next few weeks or so. We want to use Rhianbut want to help him as well, that'swhy wehave tomake decisions," Klopp said about Brewster.

"He looks really promising. He can obviously score goals, that'sgood. All the rest? We will see. He's still ayoung boy, especially with his position, a No 9 up front. Wehave tosee where we can give him experience, here or somewhere else.