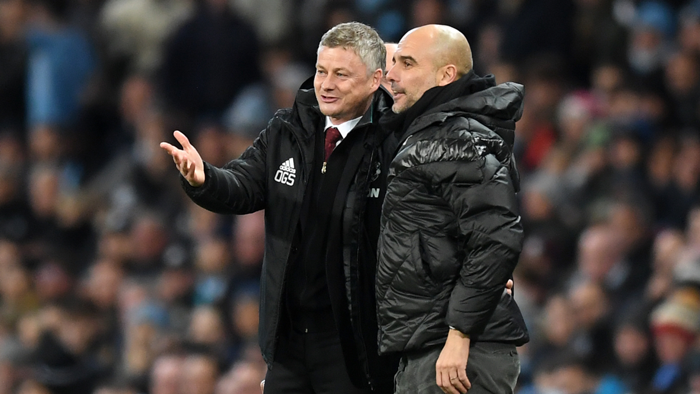 Manchester City will seek to reassert themselves against Manchester United in Wednesday's Carabao Cup semi-final, with their status as the leading team in the rivalry for much of the past decade a source of pride to Pep Guardiola.

Two of those came under Guardiola, United finishing a distant second in 2017-18 as City racked up a record-breaking 100-point haul.

The sides also met at the same stage of the Carabao Cup last season, as City prevaileden route to a third consecutiveWembley success in the competition, although there have been signs that the local argument is starting to turn of late.

“United has always been a big club," Guardiola said. "When I faced them with Barcelona, Bayern Munich and here, it was always important.

"It is a rivalry in the city and for many decades United was above Manchester City. For us, we are incredibly proud and it is an honour for the last decade to be there with them and sometimes win, most of the times, and sometimes lose."

A 3-1 first-leg triumph in last season's semi-final is City's only victory in the most recent five Manchester derbies.

Man Utd restored pride and caused nerves to jangle with a 1-0 win at the Etihad Stadium as Nemanja Matic scored and was sent off in the return game, while also completing a Premier League double in 2019-20 either side of those matches.

Both teams have hit more impressive form since December's turgid 0-0 draw at Old Trafford in their most recent encounter, although it is United who sit level on points with champions Liverpool at the summit and havea chance to go top if they avoid defeat in their game in hand against Burnley next week.

"They have always been contenders," Guardiola said. "Every year, when we start the season, United is a contender.

"If it didn’t happen in the last few seasons, it is a question for them. It is no different facing United or other contenders."

City turned in a majestic performance as they dispatched Chelsea 3-1 at the weekend - a performance that was all the more impressive after a coronavirus outbreak robbed them of six first-team players.

Kyle Walker and Gabriel Jesus have now completed 10 days of self-isolation after having positive tests confirmed on Christmas Day, but Ederson, Ferran Torres, Eric Garcia and Tommy Doyle will remain unavailable at Old Trafford for a one-off encounter - the EFL having ditched its usual two-legged format to ease fixture congestion.

“We don’t have many players. To play one or two games is okay but if this sustains for a long time and I can only use 14 or 15 players it will be more difficult," Guardiola explained.

"Like everyone in the world, we adapt, you have to adjust our lives and our professions as much as possible and we don’t have an alternative.

"The most important thing is that the guys who have Covid can recover well and the guys handle it well and try to avoid it as much as possible."