'It's not Bayern against Messi' - Barcelona have several threats, warns Munich manager Flick 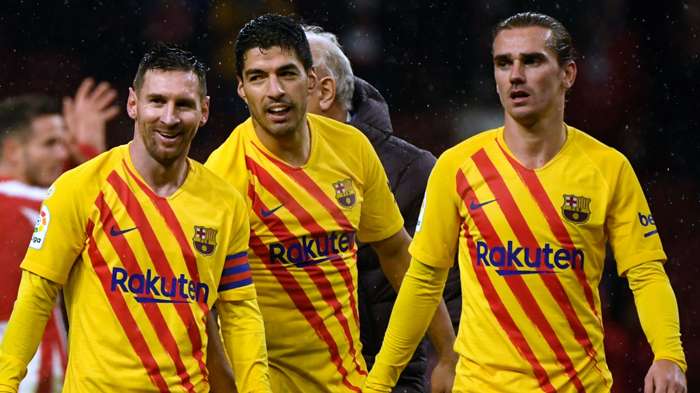 Bayern Munich are making plans for Lionel Messi, but Hansi Flick is well aware of the threat of the rest of the Barcelona team in their Champions League quarter-final.

Bayern face Barca in Lisbon on Friday in a match the Bundesliga champions are expected to win, having been in dominant form in recent months.

But the Blaugrana have Messi in their ranks, the six-time Ballon d'Or winner seemingly determined to get his hands on a fifth European crown, the most recent of those coming in 2015.

Questions at Flick's pre-match news conference focused on the threat of Barca's number 10, yet the head coach was keen to remind reporters there will be more to the match than Messi.

"It's not Bayern Munich against Messi, but against Barcelona," he said. "Of course we have thought about how we will play against him.

"It is possible that we will play together to counter him as a team. We have to recognise the spaces, put him under pressure and try to win the one-on-one duels."

Flick added: "We have the necessary respect for Barcelona because they have been the dominant team in recent years. Many coaches and clubs have been inspired by Barca.

"Messi is not the only player who stands out. Gerard Pique, Antoine Griezmann, Ivan Rakitic and Luis Suarez are top players. Marc-Andre ter Stegen is a world-class goalkeeper.

"They have enormous quality and experience and we have to go against that as a team and bring our quality. We have a plan and hope that it works."

While opposite number Quique Setien suggested Robert Lewandowski was not in the same class as Messi, Flick refused to be drawn into a comparison between his talisman and Barca's.

"You can't compare the two players," he said. "Lewandowski is a world-class striker and has tremendous quality. For us, he is someone who guarantees goals but also creates goals.

"Messi has been by far the best footballer over the past few years. He's an exceptional player and I don't know if someone like that will come around again."

Teenage left-back Alphonso Davies has been one of the stars of the Champions League campaign so far but may now be the man tasked with marking Messi.

Team-mate Thomas Muller is determined not to leave the Canadian to face his mammoth task alone, though.

"Messi is in good shape, but you never defend him alone," Muller said. "My experience from the games in which I faced him was that it worked when the whole team was there.