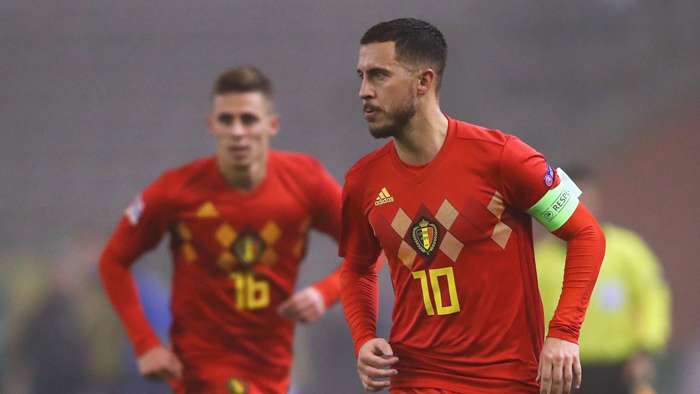 Belgium star Thorgan Hazard has expressed his frustrations with the intense 2020-21 season schedule ahead of his country’s upcoming international triple-header.

Though Hazard has been limited to just 135 minutes in the Bundesliga with Borussia Dortmund this term thanks to a ruptured thigh muscle, he has become the latest figure in the game to weigh in on the fixture crush.

UEFA has received significant flak for its part in the increasingly busy calendar, as it opted to turn the October and November international breaks into three-match periods instead of sticking with the usual two games, a move it says was made to recover the dates postponed in March due to the coronavirus pandemic.

"It's all too much, not just for me," Hazard told reporters on Monday. "Champions League, Bundesliga, Nations League…I don't want to complain too much because we have to do our job, but it is a lot.

"Well, here at the Red Devils, everyone will get playing time. The national coach has selected many players. Playing them in all three matches for 90 minutes would be difficult.

"The players will not burn themselves out. Our coaches also ask us to be careful, not to risk too much.

"We also play with Dortmund every three days. It is a difficult issue – the national coaches also have to do their job. If we don't feel well, let's just say so."

Belgium have already lost three players to injury on Monday, with Leandro Trossard, Alexis Saelemaekers and Hendrik van Crombrugge pulling out – only the latter has been replaced, with Blackburn Rovers goalkeeper Thomas Kaminski called up.

Hazard's brother Eden was already ruled out having recently tested positive for coronavirus, meaning the Real Madrid winger will have gone more than a year without playing for Belgium by the time of his next cap.

"One year is indeed a long time," Thorgan Hazard said of his older brother's absence. "I hope this will be over soon. Both Belgium and Madrid miss Eden.

"He is one of the best players in the world and it is always better to have him in your squad. Madrid lost last weekend without him and the Red Devils were also defeated in England. We all need an Eden at 100 per cent.

"Nevertheless, he feels good. He is in good health and shows no symptoms of COVID-19. He is quarantined at home in Madrid and unfortunately he is not here.

"It was really a surprise for him, an unpleasant one. The injury was gone and then coronavirus was showing up. I really hope that next time there is not something again.