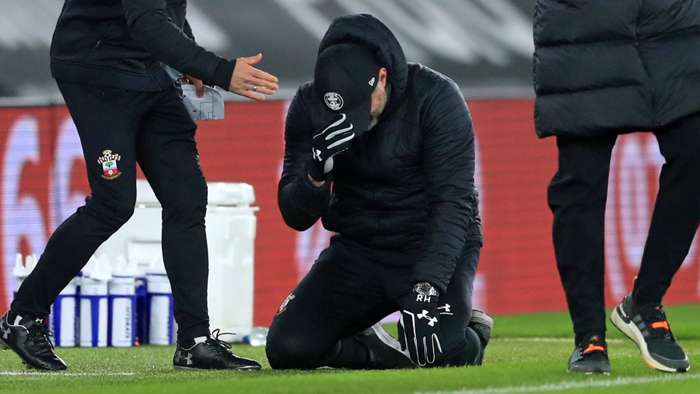 Southampton boss Ralph Hasenhuttladmitted that there were tears in his eyes following his side's 1-0 triumph over Liverpool as the Austrian manager joked saidtears were caused by the wind, not his team's emotional victory.

Liverpool were held without a shot on target until the 75thminuteas Southampton stood tall against Jurgen Klopp's side.

After the win, Hasenhuttlwas seen on his knees on the sideline as tears flowed, with several coaches coming to offer the Southampton boss a pat on the back.

And, moments later,Hasenhuttl explained why he was so emotional, although he preceded it by trying to offer a more practical explanation.

"There were tears in my eyes - because of the wind!" he joked to BBC Sport."When you see our guys fighting with everything they have it makes me really proud. You need to have the perfect game against Liverpool and I think we did that.

"It felt like we were under massive pressure and the defending around the box was the key today - then still try and play football. We did it in a good way.

"It was an intense game, my voice is nearly gone. The guys are tired, you have to be to win against such a team. The guys believed in what they were doing.

"In the 92nd minute I thought, OK, it can be something for us. It's a perfect evening."

The day's goalscorer Ings was full of praise for his manager after the match, saying that Hasenhuttl's passion for the club has rubbed off on the players as they look to continue to push up the table.

"He is very passionate and he brings that passion into the game and it's great for us to see that," Ings told Sky Sports. "The manager has got us all working our socks off and it's really paid off."

He added: "The last couple of seasons have been very difficult at this time and to have this start this year is great, but we are going to try to keep improving. We don't want to stand still, we want to keep going."

After finishing 11th in the Premier League last season following a difficult start to the campaign, Southampton are all the way up to sixth in the table currently.