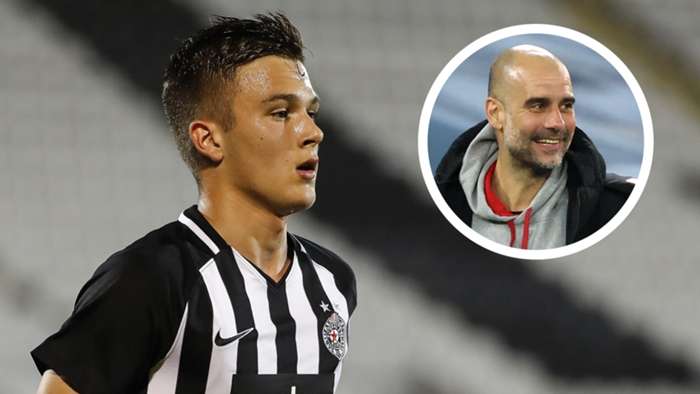 City beat off competition from a host of Europes top clubs to seal a £6 million ($8m) movefor teenager Stevanovic in October, with the deal becomingofficial during the January transfer window.

The 18-year-old has remained on loan with his boyhood club Partizan through the second half of the season, but is already looking ahead to his arrival at the Etihad Stadium.

“In my opinion, I think that I can improve the most there. It’s so fantastic to be part of such a big club as Manchester City,” Stevanovic told Goal in an exclusive interview after he was named on the NXGN list as one of the worlds top 50 wonderkids.

“But for now, I want to take it step-by-step to my next goal.

“It’s so exciting [watching them] because I dream to play fora big club like City one day, and I will do everything to make that happen.

“I watch every game and it’s so crazy how good they are. It would be my pleasure to have a boss like Pep Guardiola - I really admire him.”

Having impressed since joining the clubs academy at the age of nine, Stevanovic made his first-team debut for Partizan at the age of 16 in December 2018, becoming the third-youngest player in the clubs history in the process.

For a club with a reputation for producing homegrown players that stretches back to the Partizan Babies team that reached the 1966 European Cup final, that is quite an achievement.

The winger, who plays mainly off the left but can also play centrally, further established himself in the 2019-20 campaign, contributing nine goals and three assists despite starting just 19 matches.

The first of those goals, against Connahs Quay Nomads in the Europa League qualifying rounds, saw him become the clubs youngest scorer in European competition, and their second-youngest overall.

Injuries have limited his progress this term, though he still found the net in the Eternal Derby against Belgrade rivals Red Star a week before his City move was agreed.

“It was my dream (to play for Partizan) from when I was young, so I came prepared for everything that comes my way,” he said. “Normally at the beginning it was a little hard, but I adapted so quickly.

“It was an unbelievable feeling when I made a senior debut for such a big club like Partizan. Like I said, one of my dreams came true.”

He added: "Now I think that I must focus on myself, the style of how I play, and my dreams."

Given his pace, dribbling skills and eye for goal, as well as his versatility when it comes to his role in Partizans attack, Stevanovic has been dubbed the Serbian Cristiano Ronaldo by some members of the local media.

He lacks the physicality of the Portugal legend, however, and Partizan manager Savo Milosevic has instead compared him to Eden Hazard, citing his "football intelligence" as a major similarity between him and the Real Madrid star.