Its like a tragedy - Who is to blame for the U.S. latest Olympic disaster? 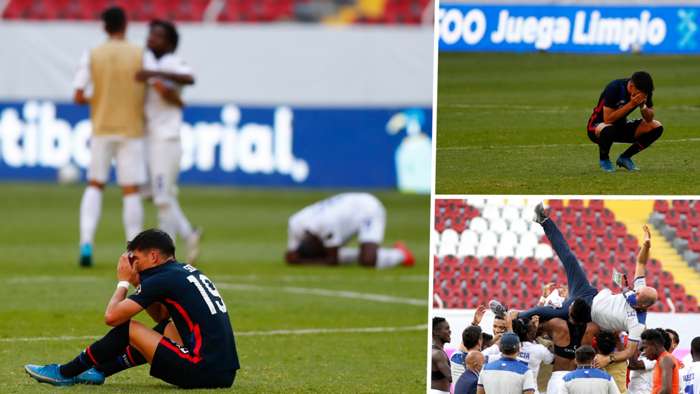 That isthe only real way to describe it. This was another complete, total, undeniable failure.

For the third consecutive qualifying cycle, the U.S. Under-23 mens national team capitulated with an Olympic spot on the line.

Another year, another catastrophe and this one will sting just as much as the ones that came before it.

This time around, it was a 2-1 loss to Honduras that proved to be the U.S.demise, the latest backbreaking blow in what has become a long line of them.

Thisprogram fell short again, with yet another epic collapse at the worst possible moment.

The details behind that collapse are complex. There are reasons to explain it, some valid and some not. But those reasons are not important in this scenario.

What matters is that, even with the U.S. in the midst of a budding golden generation proving itself worthy in Europe, they are still struggling to take care of business in their own backyard when it really counts.

"We all wanted this so badly for so many different reasons, and I thinkit could be that sometimes whenyou want it too bad, you put yourself in a position where you cant perform to the level needed.

"At the end of the day, I just dont think we had enough."

The U.S. certainly did not have enough on Sunday, withHondurasdeserved winners who more than earned their own Olympic spot. They booked their ticket to Tokyo by frustrating a U.S. team that not only lacked the quality to open the game up but, at times, the attitude.

Throughout Sundays match, the U.S. looked slow andlethargic. Even as the odds began to stack against them, only a few players, namely captain Jackson Yueill, truly stepped up to the moment while attempting to end years and years of heartbreak at this level.

In the end, that did not happen.

It began just moments before half-time, with just a few seconds remaining in what was a tepid and slow first half. Suddenly, though, the ball was in the back of the U.S. net, bundled home byJuan Carlos Obregon Jr.

That, though, was only the opening act for what proved to be the real soul-crushing mistake.

Goalkeeper David Ochoa, arguably the teams best player throughout this tournament, made his first real error at the worst possible moment.

With the ball at his feet, Ochoas attempt to play out fromthe back quickly turned into a disaster as the keeper smashed a pass offHonduras Luis Palma and straight into the back of his own net just moments into the second half.

From there, there were moments that provided hope, Yueills long-range goal included. But thatproved a small consolation from a calamitous day for a team that simply could notget it done.

Because of that, there will be plenty of fingerpointing in the wake of yet another qualifying mess.

Blame will fall onKreis, whose decision to leave behind players such asJeremy Ebobisse and Eryk Williamson have looked worse by the day. The U.S. head coach will also earn criticism for his tactics, as Kreis attempt to place square pegs in round holes certainly contributed to this result.

Blame will also fall on the players, who simply failed to step up and battle at a time where they had no other choice. Aside from one good half against the Dominican Republic, this U.S. team simply never looked like they had the quality or creativity to break down even average opposition.

And, of course, the blame will go towards the circumstances, with the U.S. team left shorthanded by a combination of USMNT commitments and clubs beingunwilling to release players for this event.

The U.S. had 15 Olympic-eligible players watching on from USMNT camp in Belfast, with two others, Weston McKennie and Tyler Adams, among the ones that would have been there in normal times.

But, in the end, blame can be spread in each and every direction, and rightfully so.This was a program-wide failure. Another one.

"Having said that,its a collective effort. It wasnt just me making those decisions, but Im more than willing and able to take the brunt of the blame."

This was a missed opportunity. It was a chance for young players to earn a spot on the big stage. It was a chance for the U.S. program to reassert itself as a CONCACAF powerhouse after the failures of previous Olympic cyclesand, most recently, the 2018 World Cup qualifying run.

Perhaps most importantly, this was an opportunity to show that things were moving forward, an opportunity to win back some of the publics trust in an Olympic competition that even the most casual American fan will care about.

The U.S. program will move on quickly, especially with World Cup qualifiers on the horizon. There are brighter days ahead, and this mess does little to dampen the excitement that surrounds the USMNT and all of the bright young stars currently emerging overseas.

Until then, though, this will sting as yet another cycles worth of players fell short.

"Ultimately its my very strong feeling that there are extremely good players with extremely high potential in that room," Kreis said. "There are young players and they need to continue to develop, continue to learn,continue to move forward.

"Its a fact of life that you lose more than you win. And its always going to be about who gets up and moves forward the quickest, because these disappointments happen in your life over and over and over again. You have no choice but to move forward, and I hope that these players do that."

Someday, maybe, Kreis adage will be proven wrong. Someday maybe the U.S. will turn these backbreaking losses into wins more often than not.