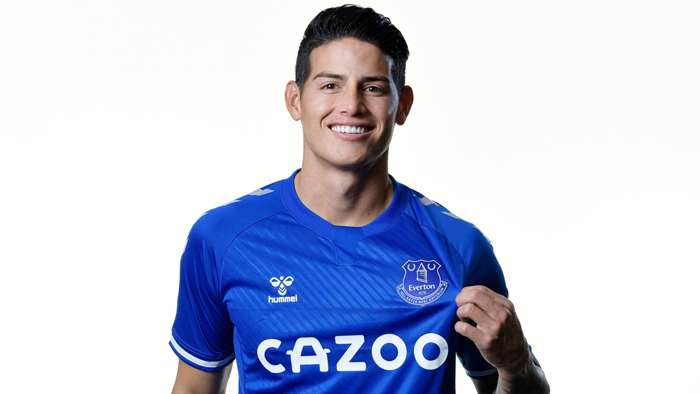 James Rodriguez hopes other "big names" will join him at Everton as they target a strong 2020-21 season.

James joined the Premier League club from Real Madrid for £22million (€24m/$29m) earlier this month in a huge coup for Everton.

The playmaker is reunited with Carlo Ancelotti, who coached him at Madrid and Bayern Munich, as Everton look to improve on last season's 12th-place finish.

James, 29, hopes there is further growth to come at Goodison Park.

"We can't afford to be up and down in our performances. It helps obviously when you've got a great and hugely knowledgeable manager that we have," he said. "The club has proved its intent with the three signings it's made in this window and let's hope that, in the next few months, we can show that optimism.

"Let's hope over the period of seasons and the next few years, other big names will come in to join us."

James is one of four arrivals at Everton, with Allan, Abdoulaye Doucoure and Niels Nkounkou also signed. The Colombia international hopes Ancelotti's side can push for a top-four finish, something they last managed in 2004-05.

"There are some serious-minded people at this club who mean business about getting this club into those Champions League places and that's very important, I think," James said. "Obviously you have to fight hard to get in those places and what you have to do is show consistency.

"In a Premier League season you're talking about a game every three or four days a lot of the season, so you have to show a high standard and display a high standard of football not just every other game, but every game.

"We need to be consistent and perform at our highest level if we want to be up there fighting for those top places."

James moves to Goodison Park having made just eight appearances inLa Liga for Real last season as Zinedine Zidane's men lifted the title, and had less than a year left on his contract with the Santiago Bernabeu side.