'James was desperate to play at Real Madrid' - Colombian star has 'found the right place' at Everton, says Ancelotti 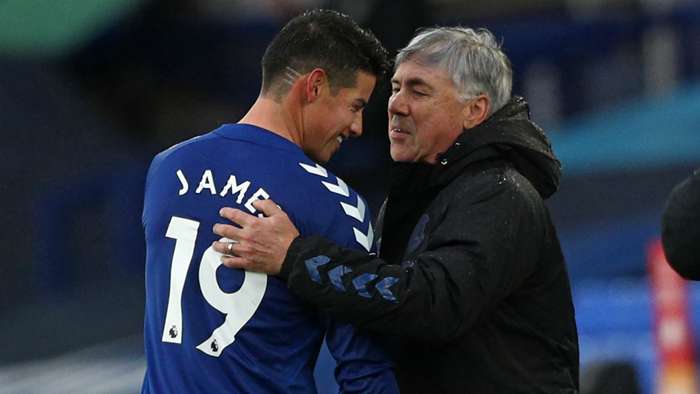 James Rodriguez was "desperate to play" at Real Madrid, according to Carlo Ancelotti, who says the Colombian star has "found the right place" at Everton.

James spent six years on Madrid's books after joining the club from Monaco for £63 million ($83m) following his star turn at the 2014 World Cup in Brazil.

The midfielder attracted the Blancos' attention after helpingColombia reach the quarter-finals of the tournament, during which he also managed to pick up the Golden Boot.

He never quite managed to live up to the potential he showed on the international stage during his time at Santiago Bernabeu though, despite winning two La Liga titles and two Champions League crowns.

James scored 37 goals in 125 games for Madrid in total, butfound himself on the fringes of the action after returning to the club in 2019 following a two-year loan spell at Bayern Munich.

The Toffees snapped James up for£22million (€24m/$29m), which has so far proved to be a bargain fee, with the ex-Monaco star contributingthree goals and three assists in his first seven Premier League outings for the club.

Ancelotti, who was in charge of Madrid when theColombia international moved to the Bernabeu, thinks a man who has struggled for consistency over the years has finally arrived at the perfect destinationfor his talents to shine through.

"First of all, he wanted to find aclub where he could play more frequently compared to Real Madrid," the Everton head coach told NBC Sports.

"He had times at Real Madrid where he didn't play a lot. He wanted a new challenge, was desperate to play, and I think he found the right place, because he knows me, I know him ... The club wants to improve, the club has a big project.