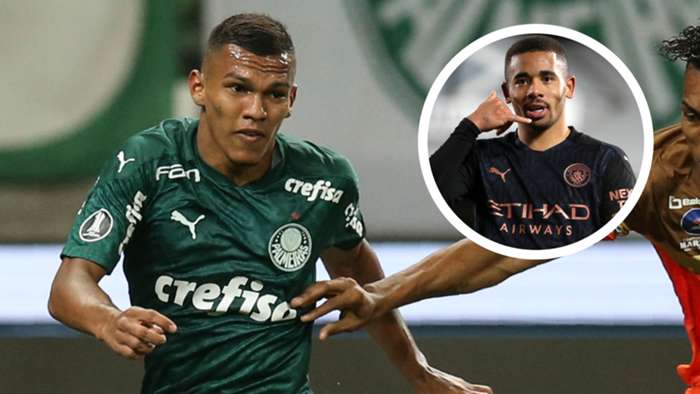 Palmeirasteenage star Gabriel Veron wants to follow in the footsteps of Manchester City striker Gabriel Jesus as he plots his own path to the top of the game.

Jesus left Palmeiras at the age of 19 in January 2017, joining City in a deal worth a reported £27 million ($36m), and has gone onto become one of the Premier Leagues best young forwards.

And Veron, who placed 12th on Goals 2021 NXGNlist of the 50 best teenage footballers on the planet, is using the Brazil internationals rise as inspiration for his own career.

"Gabriel Jesus -I usehim as an example," Veron told Goalin an exclusive interview. "He is an excellent player who isalways working to reach the top.

"He is an example tome, for my career. I hope I can follow in his footsteps."

Veron has been linked with a move to City, while Manchester United, Barcelona and Arsenal have also been credited with showing interest inthe 18-year-old.

And the winger has been keeping a keen eye across Europes top leagues as he considers his potential next move.

"I watch the Premier League," he said. "Its a very difficult tournament, where every game is difficult, andI like to watch games like these.

"I watch La Liga andSerie A as well. I like to watch everything."

Veron first came to international prominence when leading Brazil to glory on home soil at the 2019 Under-17 World Cup.

He scored three goals and laid on two assists in the competition,before being awarded the Golden Ball as the player of the tournament.

From there he broke into the Palmeiras first team, and in 2020 had a year to remember as, despite suffering from persistent injury problems, he contributed nine goals and four assists as the Sao Paulo outfit won both the Copa Libertadores and the Copa do Brasil.

"Therere lots of people who may think this was a season to forget for me because I went through many injuries," he said, "but I consider this season as one of knowledge and adaptation.

"I had lots of injuries,but I was always with the squad, working andhealing totry andrecover as fast aspossible so I could be playing onthe pitch again.

"Even without being able to play as many games as I would have liked, we made history for the club. It was an historic season.

"Thinking about this new season my expectations could not be higher. I want to escape from the injuries Ive had in 2020 and for us to have a great season."

In terms of his most memorable moment, he said: "I think it was my Libertadores debut. I will always remember it because it was a tournament that Ialways watched on TV.

"So playing (in that competition)with a Palmeiras shirt, the clubwhich gave me my opportunity -I was very happy with that."

Though Veron shares a name with Argentina legend Juan Sebastian Veron, they are not related, though they do have a connection.

When the young Brazilian was born in 2002, his parents could not decide on a second name for their son, only for a neighbour to offer the suggestion of Veron.

The neighbour was a huge fan of the ex-Manchester United midfielder, but having fathered three daughters he had not wanted to give any of them the name of his footballing hero.

Verons parents were not aware of the footballing connection at first, but the teenage star has since headed to YouTube in a bid to learn more about the man he was unintentionally named after.