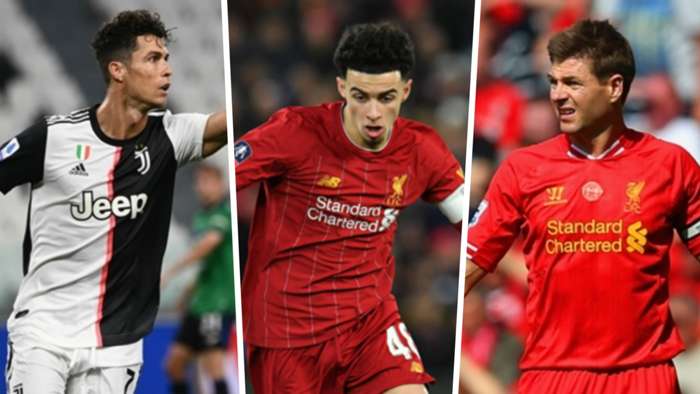 Curtis Jones grew up wanting to be likeCristiano Ronaldo, but a Merseyside native is now looking to follow in the footsteps of Steven Gerrard and “become a legend” at Liverpool.

Jones is among those to have taken their chance, with the promising midfielder becoming the club’s youngest captain at one stage – having taken the armband for an FA Cup clash with Shrewsbury – and signing a new long-term contract.

He also got his hands on a Premier League winners’ medal, having made six top-flight appearances in a title-winning campaign, and is determined to build from this point.

Jones appears to have the perfect role models in place, with there a desire on his part to emulate the achievements of five-time Ballon d’Or winner Ronaldo and Reds icon Gerrard.

“Growing up in Liverpool,Steven Gerrardis the king of the city,” Jones told the Liverpool Echo.

“He is the one you look up to and think 'wow, imagine being him!'. Working with him a bit closer as my U18s manager he was someone who has been massive for me in the game already.

“I would always watch Cristiano Ronaldo as a kid and I wanted to be him as a player but now, as I get older, I can appreciate so many other types of footballers. So many, I look back at the ones I was too young to remember and there are loads.

“But in terms of representing this city and being a symbol, as someone who is a legend in this city with the people that love him, then my hero growing up would have to be Steven Gerrard.

“For Steven, I don't think he needed to try and teach me how to be an attacking midfielder like he was. I think he could see what I had on that side of the game. But what he taught me was the other side, the running, the tackling and the determination to be the best player on the pitch.

“Steven was the Scouse heartbeat in the team for so long and that is important to have at Liverpool Football Club. I know the fans sing about the 'Scouser in our team' now for Trent Alexander-Arnold and he is filling the boots of Gerrard in terms of what he represents.

“Steven did so much for this club and now Trent is on that same pathway. Trent is known for the corner against Barcelona or the free kicks against Chelsea, so if I can be known for great things like that then I would love it. I want to win games and trophies for these fans. That is why we do this.”

Jones added on his ambition: “I've got goals I want to achieve, of course. I could sit here and write that I want to win the Champions League, the World Cup, the Ballon d'Or...you name it. But I just want to repay the faith the manager and his staff have in me.

“To be a local lad involved in that lifting the Premier League title is definitely a dream come true and I am just happy that I have made my family and the fans proud.

“I can't wait until it is my turn to be in the team and I am winning games with the club. I want to become a legend in this city myself.”