Justin: 'Liverpool can use Jones and Williams like Leicester promoted me' 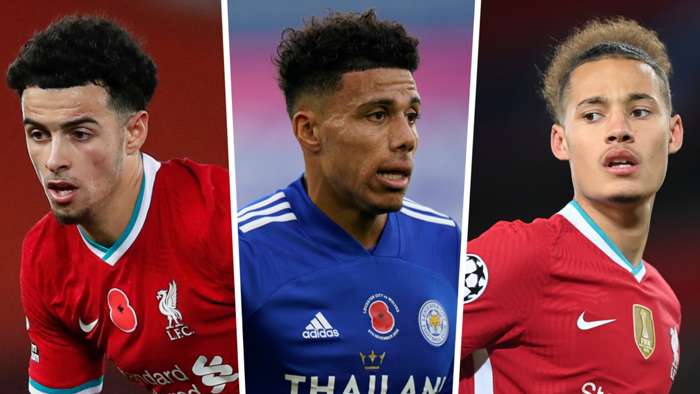 Leicester City defender James Justin thinks that Liverpool's injury problems are similar to ones faced by his own club ahead of their top-of-the-table clash at Anfield on Sunday.

Jurgen Klopp's side are facing a similar injury crisis withVigil van Dijk, Joe Gomez and Trent Alexander-Arnold all currently absent. Furthermore, Mohamed Salah has tested positive for Covid-19 and AndyRobertson, ThiagoAlcantara and Jordan Henderson are also doubts ahead of the match at Anfield.

Justin is team-mates with some outstanding young Liverpool players withEngland's Under-21 side and hopes Klopp will give the likes of Curtis Jones and Rhys Williamsa chance as Brendan Rodgers did with him.

"The season has been tough for a lot of teams and there’s been a lot of injuries at certain clubs and we are one of them, but you’ve got to not only build a first XI, you need to build a squad," Justin said during the international break.

"That’s what these times are for. We are proving we have a really good squad and Liverpool obviously have an excellent squad at theirs. I’m sure they won’t be scared going into the game, and be more than happy with what they’ve got.

England's U21s have produced back-to-back wins over Andorra and Albania totop their group and qualify for the European Championships next summer.

Manager Aidy Boothroyd is hoping to use Justin as a starter in the tournament and he is also increasingly leaning on Liverpool duo Williams and Jones. The 22-year-old thinks these two are ready to make the step up this season.

"The first time I trained with both of them I was really impressed with the talent that they had," he added.

"To be honest, I hadn’t seen much of their talent when I had been watching football because they’ve only been in and out of the first team, but hopefully now they can get a few games under their belts and show everyone the ability they’ve got.

"I’ve seen that first-hand and they are definitely good players for Liverpool. Hopefully, they can make it into regular first-team players.”

Meanwhile, Justin has big ambitions for himself after making the breakthrough at Leicester in recent months.

He has had to be patient with Ben Chilwell and Ricardo Pereira ahead of him in the pecking order but after Chilwell's transfer to Chelsea and a big injury to Pereira, Justin got his chance.

He is thankful to Rodgers for developing him into a Premier League player and a contender for England following his transfer from League One Luton Town in 2019.

“Brendan is a great manager," he continued. "I knew when choosing Leicester that the road into the first team was going to be hard but that I would also become a better player playing under the coaching staff there.

“It’s been a really good 12 months for me, personally. On the pitch, it’s been excellent. I have been getting a lot of help from the coaches at Leicester and from Aidy and the coaching staff with England – just little pointers that can improve my game.

"Hopefully, now I can show everyone I’m a senior player. This year we’re playing a lot of games with Europa League and the Premier League back-to-back. We’re doing well in both competitions.