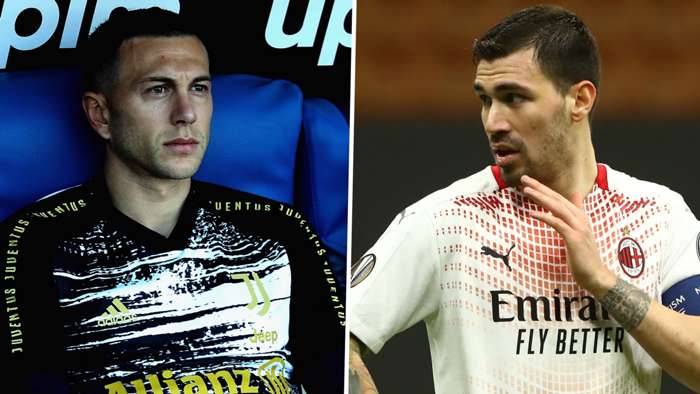 Both players are approaching the final year of their respective contracts and extension talks have so far failed to advance.

Juve and Milan have already begun preparations for the 2021-22 seasonand could put into place a mutually beneficial deal that would see both players head in opposite directions.

Bernardeschi has been a regular in the Juve starting XI since joining the club from Fiorentina for €40 million (£34m/$38m)in 2017, making over 140 appearances for the club across all competitions.

Thirty-six of those outings have come this term, but he has not been deployed in his favoured No.10 role too often, with Andrea Pirlo using him as both a full-back and winger on multiple occasions.

Goal can confirm that the 27-year-old is ready to embark on a new challenge in unfamiliar surroundings to reignite his career, having seen his market value drop below €30m (£26m/$36m).

Romagnoli had been an essential cog in Stefano Piolis squad prior to this season, but has fallen down the pecking order since Fikayo Tomoris arrival at San Siro on loan from Chelsea in January.

The 26-year-old centre-back is still Milans official club captain, but the Italian giants are ready to sanction his departure in order to bolster their ranks in other areas of the pitch as they prioritise the permanent signing of Tomori.

A swap deal may represent the best option for the Rossoneri because of the 30 per cent sell-on clause that was included in the €25m (£22m/$30m) deal which saw him join the club from Roma in 2015.

Goal has learned that officials from Juve and Milan are planning to sit down to discuss the viability of a potential exchange, with Mino Raiola set to be involved in negotiationsas the main legal representative for both players.

One of Juves main goals for the summer is to bring in a long-term replacement forGiorgio Chiellini, who will leave the club when his contract expires at the end of June.

Romagnoli fits their profile as a left-footed defender with plenty of years at the top level still ahead of him, and Milan could also become a stronger side with the addition ofBernardeschi.

A lack of depth in attacking areas has ultimately prevented Piolis side from maintaining their Serie A title challenge, with Inter currently sitting eight points ahead of them at the summit with a game in hand.

Bernardeschi has the experience and quality to add a new dimension to Milans line-up, and the opportunity to return to his natural position as a No.10 could see him rediscover his best form.

Juventus are important to me - Zidane

Pirlo reveals he was warned of Agnellis meeting with Allegri

McKennie, Arthur and Dybala to return for Juve v Napoli