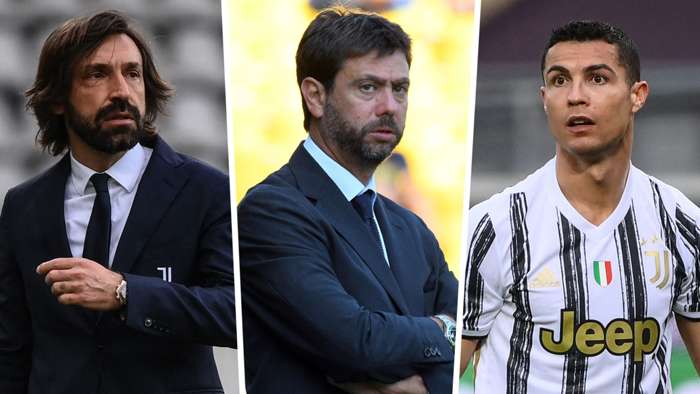 Long before the pandemic rocked football to its very core, Andrea Agnelli called for the Champions League to be restructured.

The Juventus president took issue with the idea that an elite club could miss out on qualification because of one "bad season", given "the resulting financial damage".

Rather than question the wisdom of basing ones budget upon the presumption of Champions League football, Agnelli and his many supporters merely focused on lowering the risk of missing out, by essentially undermining the results-based meritocracy upon which the game is founded.

His dream format, which allocates a couple of places based on club coefficients to sides that do not qualify via their domestic leagues, is now set to be ratified by UEFA at the end of the month.

Agnellis nightmare, though, could become reality before those changes come into effect, in 2024.

As it stands, Juventus are in very real danger of failing to qualify for next seasons Champions League, currentlylevel on points with fifth-place Napoli and just four points clear of sixth-place Lazio. Their slump could not comeat a worsetime.

Like so many other top European clubs, the Bianconeri have been hit hard by the economic crisis caused by Covid-19.

They have already posted losses of €113.7 million(£98m/$135m) for the first half of the 2020-21 campaign and last months shock Champions League last-16 elimination by Porto has only heightened the tension in Turin.

Indeed, immediately after Juves exit, the question was repeatedly asked: Can the club really afford to keep Cristiano Ronaldo next season?

The Portuguese superstar has done exactly what was asked of him, boosting the Old Ladys profile off the field, while scoring freely on it.

However, Ronaldo costs Juve around €85m (£73m/$94m) peryear in wages, taxes and amortisation.Thats an awful lot of money to be spending on one player, particularly when other areas of the squad are clearly in dire need of strengthening during the summer transfer window.

Sporting director Fabio Paratici has insisted Juve have no intention of parting company with Ronaldo, telling Sky Sport Italia: "We have the best player in the world, and we’re holding on tight."

But their grip on the legendary forwardwouldloosenif they fail to finish in the top four.

After all, theres simply no way Ronaldo would see out the final year of his contract if he was to spend next season playing in the Europa League, and regardless,Juve couldnt afford to keep him in that scenario.

The good news for the Bianconeri is that they still hold their destiny in their own hands, and they are set to face Napoli on Wednesday night in a hugeopportunity to return to a more comfortable qualification position. They havewon eight of their last nine home games against the Naples club in Serie A.

The bad news, though, is that Napoli have takenthe pairs last two league meetings, and it is they who are the form side right now.

Gennaro Gattusos men are on a four-game winning streak -their best run of the season - while Juve come into the game on the back of an embarrassing home defeat by Benevento and a damaging draw at Torino that was preceded by a shameful breach of Covid-19 regulations by three players.

The Corriere della Sera has even claimed that Andrea Pirlo will be sacked if the Bianconeri are beaten by their southern rivals.

The former Italy international still has plenty of supporters, inside and outside the club.

Fabio Cannavaro quite correctly pointed out that Juve would look ridiculous if they abandoned the Pirlo project after just one season.

"When Juve picked Andrea, he knew very well that he had no experience," the World Cup winner told the Gazzetta dello Sport on Tuesday.

“It’s logical that he should have time to mature, even for his relationship with the team. There are still 30 points to play for and it’s right to leave this judgment pending.

“And he did good things, launching young players and managing a complicated dressing room with people who won a lot.Sure, some things don’t work, he has made mistakes: he’s human...

"And if Juve don’t confirm his position, what did they choose him for last summer?"

The flippant response would be, because he was cheap.

Juve, remember, are still paying former coach Maurizio Sarri, which is why it has even been suggested by some pundits that they should bring him back for the remainder of the season to make sure they finish in the top four.

Thats simply not going to happen, of course. But the idea that another former Bianconeri boss could return is gathering momentum.

Massimiliano Allegri met with Agnelli at the weekend, which obviously sent the rumour-mill into meltdown.

The job he did in Turin – five consecutive Scudetti and two Champions League final appearances –looks better and better with each passing week, and some fans would dearly love to see him brought back to steady what looks like a sinking ship.

Its highly unlikely, though. Just over a fortnight ago, in detailing how his Juventus tenure came to a "natural end", he told Sky that he still had a "good relationship" with Agnelli.

Their meeting was arguably just evidence of that fact rather than something more meaningful. As Pirlo told reporters on Tuesday, "I was warned by the president himself about this meeting with Allegri. They are friends.

"Outside of football, friendships endure. If I were going to dinner with (Paolo) Maldini, the next day it would be said that he wanted me as Milan coach.There are also friendships in football. These are normal things."

Still, the timing of it all was dreadful from Pirlos perspective.

Allegris mentor Giovanni Galeone said the Livorno native will only make his comeback at the end of the summer, he did not rule out a return to Juventus.

That only intensified speculation that Pirlo could be removed from his role now -and replaced by Igor Tudor on a temporary basis - or at the end of the season by Allegri.

Pirlo, then, desperately needs to provide evidence against Napoli that he can meet Juves most basic goal: Champions League qualification.

He insisted in his pre-game press conference he retains the full support of his employers, and his players, but conceded that things havent gone according to plan at all.

"I didnt expect such a difficult year," he confessed. "With this international calendar there has been an accumulation of commitments that have led to this being such a special year that we shouldn’t repeat.

“This year, a lot has happened that will help me grow and, from here, we will start again."

Hell be starting again somewhere else, though, if he fails to finish in the top four.

Pirlo is by no means to blame for all of Juves present problems, the majority of which can be attributed to poor transfer strategy –something he has no control over.