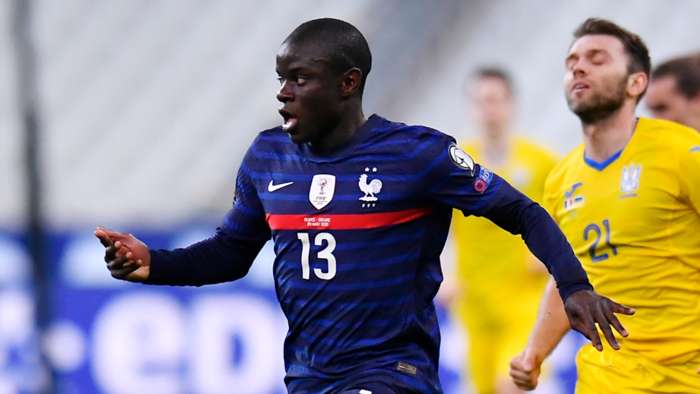 NGolo Kane has been ruled out of Frances next two World Cup qualifiers due to injury.

The Chelsea midfielder tweaked his hamstring late on during less Les Bleus 1-1 draw with Ukraine on Wednesday night.

He will now travel back to Stamford Bridge early to undergo treatment, with France confirming the news in an official press release.

"NGolo Kantewill not take part in the next two matches of the French team on Sunday in Kazakhstan and three days later in Bosnia-Herzegovina," a statement on the French Football Federation website reads.

"The Chelsea midfielder felt a pain in the hamstrings of the left thigh at the very end of the match against Ukraine on Wednesday at the Stade de France.He had clinical and radiological examinations on Thursday, which revealed a small lesion.

"In consultation with Doctor Franck Le Gall, national coach Didier Deschamps has decided to put NGolo Kante back at the disposal of his club tomorrow.

"NGolo Kantewill not be replaced.It is therefore a group of twenty-five players who will fly to Kazakhstan tomorrow morning."

Didier Deschamps will have to make do without Kante for Frances next two Group D fixtures, and Blues boss Thomas Tuchel will also be sweating on his fitness ahead of a crucial run ofdomestic and European fixtures.

Depending on the timeframe placed on his recovery, Kane could sit out Chelseas Premier League fixture against West Brom on April 3 and a Champions League quarter-finalfirst leg clash against Porto four days later.

Tuchels men are then due to take in a trip to Crystal Palace before welcoming Porto to the Bridge for the second leg of their continental tie.

Kante has enjoyed another stellar season at club level with Chelsea, and his presence could be crucial to their chances of going all the way in both the Champions League and FA Cup, as well as securing a top-four Premier League finish.

He will also hope to be fully fit and firing in time for this summers European Championships, where France will be hoping to go one better than their final appearance in 2016.

Why does Karim Benzema not play for France?