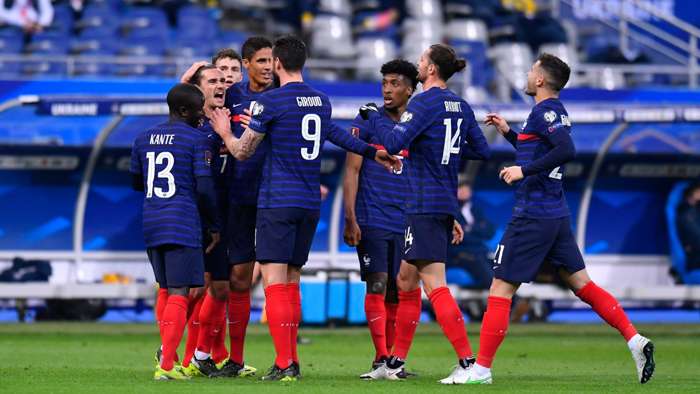 France travel to Kazakhstan on Sunday with Didier Deschamps side looking for their first win in 2022 World Cup qualifying group D.

Les Bleus were held to a 1-1 draw at home by Ukraine in their opening group game on Wednesday night, but will fancy their chances of getting back on track against one of the lowest ranked teams in Europe.

The hosts are clear outsiders, with bet365 pricing them at 16/1 (17.00) to record what would be one of the biggest upsets in recent memory.

NGolo Kante picked up an injury against Ukraine which has ruled him out of Frances two subsequent games during this international break.

Deschampshas suggested there will be changes in the side for this weekends clash after the disappointing result in their opening group game, with the likes of Paul Pogba, Ousmane Dembele and Anthony Martial all pushing for starting berths.

Whilst France created chances against Ukraine, they lacked not only a cutting threat but also some dynamism in the final third as well.

The addition of Dembele to the starting eleven could bring the spark of electricity that was lacking on Wednesday, while more will also be expected of Kylian Mbappe who was sub-par.

Their opponents on Sunday will be considerably less competitive than Ukraine,with Kazakhstan ranked 122nd in the world and having lost to Belarus, Albania and Lithuania in their most recent UEFA Nations League matches.

Les Bleus, then, should be able to rack up the goals and restore some confidence against a vastly inferior side.

The hosts have conceded in both halves in three of their last four matches and backing France to win both halves atevens (2.00) looks like a tempting option.

Also worthy of consideration could be backing the visitors to net over 2.5 goals which is priced at 4/5 (1.80).