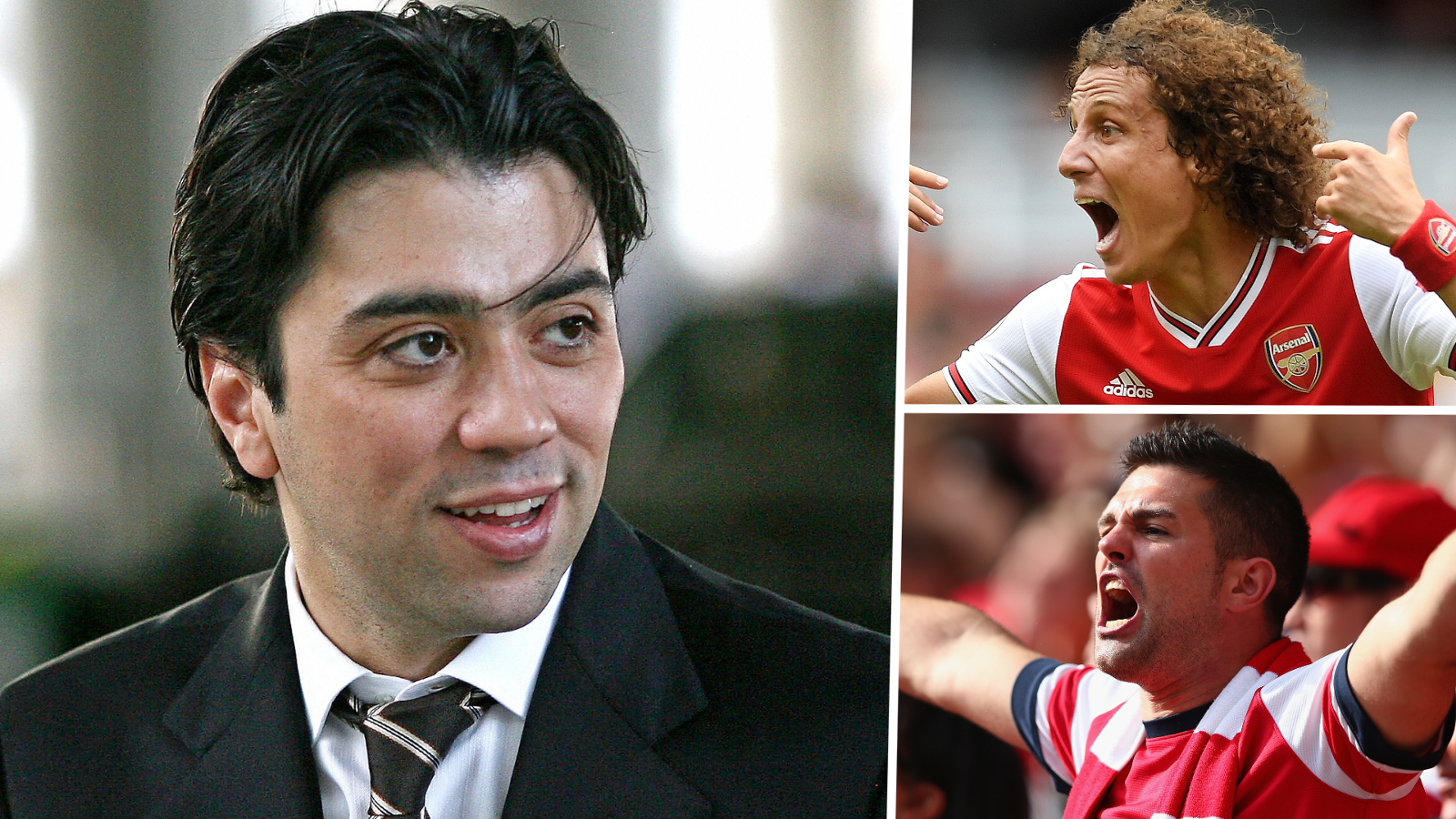 Reeling from back-to-back Premier League defeats since their return to action, Arsenal supporters' concerns over matters on the pitch have been exacerbated by further doubts over the handling of the club's transfer business .

One man in particular has been signalled as pulling the strings behind the curtain at the Emirates Stadium; a manwhose record in football has been as impossibly lucrative as it has been contentious.

When Kia Joorabchian first walked through the doors of Corinthians in 2004, few connected with the Sao Paulo giants had a clear idea of who the Iranian-born British-Canadian businessman was.

Fewer still knew exactly whom he represented, whilenot many others gave it a second thought.

On offer for the Timao was, seemingly, the chance of a lifetime. Through Media Sports Investment, Joorabchian committed to an injection of $35 million to aid the cash-starved Brazilian side, $20m of which would go towards paying off its crippling debt.

“Now we will start our real work, which is to transform Corinthians into the team to beat in Brazil,” the MSI president pledged to Folha upon taking control, while promising that big-name signings would soon follow.

Daniel Passarella, a two-time World Cup winner as a player with Argentina and the Albiceleste coach in 1998, was drafted in to sit on the bench. On the pitch Corinthians pulled off the stunning double coup of Boca Juniors star Carlos Tevez and River Plate midfielder Javier Mascherano, both already full internationals.

The likes of Roger, Carlos Alberto, Nilmar, Gustavo Nery and Sebastian Dominguez followed, forming a formidable side dubbed the 'Galacticos' that took Corinthians to the fourth Brasileirao title in their history. Fans' euphoria, however, proved short-lived.

The stellar talent on the team's books was actually part of Joorabchian's ever-growing stable, funded in a manner that was never made entirely clear. Among the many legal actions the unofficial 'super agent' has faced over the years were charges of money laundering and illicit association, with Brazilian authorities accusinglate Russian oligarch Boris Berezovsky as his accomplice.

“This is a scheme to use Brazilian football for money laundering on an international scale with the attempt to involve federal authorities,” Congressman Silvio Torres told his peers at the height of the investigation, dubbed 'Operation Perestroika' by Brazil's Federal Police.

Joorabchian was alleged to be Berezovsky's frontman in a web of financial actions that had the ultimate goal of funnelling the Russian oligarch's illicit earnings into Corinthians, although the case was eventually dropped a year after Berezovsky's death in 2013 due to lack of evidence.

By that point, however, Kia had seemingly grown tired of Brazilian football. In August 2006, Tevez and Mascherano were sent to West Ham, the apparent prelude to the businessman's own (eventually frustrated) takeover of the Hammers, in one of the most controversial pieces of transfer activity in Premier League history.

Shortly before his first foray into the English game he had resigned his own presidency at the Brazilian arm of MSI, although he remained on the board. The following year, embroiled in legal troubles, Corinthians ended their association with the group, and a matter of months later, with their Galacticos team of 2005 already gutted, were relegated to Serie B for the first time in history.

Joorabchian, nevertheless, remained on close terms with new club president Andres Sanchez, telling UOL “he has always been my friend and always will be".

While Joorabchian's dreams of owning a Premier League club were ultimately thwarted and his model of third-party ownership of players ended in the English top flight in 2011 due to the controversy caused by the transfers of Tevez, Mascherano and latterlyJo to Manchester City, he remains heavily involved in football across the world.

Kia is reluctant to describe himself as an agent, telling the Guardian in 2008: “I think the agency business is very different”, and preferring the title of investor or adviser to clients. He nevertheless works closely with a stable of licensed representatives, notably fellow Iranian Nojan Bedroud, who has worked with him since the Corinthians days.

The pair worked together to broker some of the world's biggest ever deals, including Philippe Coutinho's arrival at Barcelona and, more recently, David Luiz'smove to Arsenal from Chelsea.

Both Luiz and Cedric Soares' arrivals at the Emirates Stadium were brokered by Joorabchian;a lifelong Arsenal fan who reportedly attempted to buy the club early in his career before being priced out and turning his gaze on Brazil.

Having found the doors shut to him during Arsene Wenger's two-decade tenure, Kia is making up for lost time in north London, aided by the presence of former 'Invincible' Edu as the club's technical director. The ex-Corinthians and Brazil star performed the same role under Sanchez at the Sao Paulo club in 2011 and also moonlighted as Carlos Queiroz's assistant with Iran during the 2014 World Cup, where the national team used the side's Arena Corinthians home as a training base.

While Arsenal are understandably reluctant to reveal how much influence Joorabchian holds around the halls of the Emirates, his close links with Edu and head of football, Raul Sanllehi have caused fans to fearthe formation of a powerful, albeit unofficial, cartel that directs the club's transfer business.

News on Tuesday that Luiz, who was berated by fans following his horror show against Manchester City , and Cedric, who is still to make his Gunners debut six months after his arrival on loan from Southampton, would be rewarded with new contracts only heightened the suspicion that Joorabchian's, and not Arsenal's, interests are the top priority this summer.

The Gunners could in turn argue with some justification that Pablo Mari's recent injury and Luiz's proven track record as a top-class defender -moments of self-destruction notwithstanding -mean that they would be foolish to pass up the chance to renew, while Cedric's woes are a reflection of his rotten luck with injuries rather than any judgement on the player himself.

The captures of Gabriel Martinelli and William Saliba, meanwhile, go some way to disproving the idea that the Emirates boardroom has become a closed shop and that the stars of tomorrow are being passed over in favour of players that belong to Joorabchian'sinfinite web of interests and connections.

“In English football, a Russian owns one team, a Turk another, a sheikh has another and an American has another. Here with MSI this 'little crazy man' Kia Joorabchian came over, the guy's been vilified for seven years, called a bandit, called God knows what else, then he was absolved and didn't even face trial,” Sanchez told reporters of his friend in 2015.

“But he is a bandit. Abramovich, who owns Chelsea, if he came to buy a team in Sao Paulo or Brazil they'd try to lock him up. This must be a first-world country and England, third world. We have to change that hypocrisy.”

Defining Joorabchian's exact role in an operation that spans several continents, dozens of top-level players and which generates millions, if not billions in revenue is a complex task.

What is in no doubt is that, whatever the businessman does in his day-to-day activities for his partners and clients, he does it better than almost anyone else, protecting their interests with a single-minded determination while rarely making the headlines himselfunlike media-friendly colleagues such as Jorge Mendes and Mino Raiola.

Whether those interests necessarily line up with those of the clubs with whom he does business, of course, is another story altogether.

The experience of Corinthians during those shadowy days of MSI would seem to advise caution for any party that would do business with Joorabchian: an uncompromising negotiator with a seemingly infinite book of contacts.

No matter what the eventual outcome of his dealings, the super-agent who refuses to be called an agent rarely seems to end up on the losing side.