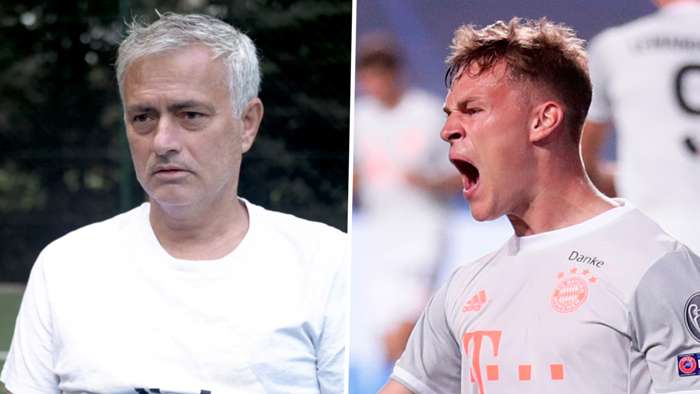 Joshua Kimmich is"absolutely phenomenal", according to Jose Mourinho, who has singled out the "intelligent" Bayern Munich player for another stellar campaign at the Allianz Arena.

The 25-year-old has amassed a total of 221 appearances for the German giants, winning 11 major trophies in total, including five Bundesliga titles.

Kimmich has contributed seven goals and 16 assists to Bayern's cause this term, helping them win another domestic double while also reaching the Champions League final.

Hansi Flick's side can complete thetreble if they beat Paris Saint-Germain in Lisbon's showpiece on Sunday, and they are favourites heading into the clash after seeing off Barcelona and Lyon in impressive fashion.

Bayern beat the Blaugrana 8-2 in the quarter-finals, with Kimmich among the scorers , before dispatching Lyon 3-0 in the last four to progress to their first European Cup final since 2013.

Kimmich has been deployed in several different positions throughout the campaign, leaving Mourinho in awe of his versatility and comprehensive understanding of the game across all areas of the pitch.

The Tottenham boss told DAZN of the German international's unique talents: "I see him as a top right-back, left-back, centre-back, No.6, No.8, No.10...he has the qualities to be anything!

Asked if Kimmich should now be considered among the best players in the world, Mourinho responded:"I think so. I’m a team coach and not an individual coach, for me, the team is much more important than the individuals.

The Portuguese tactician, who won the Champions League with both Porto and Inter earlier in his career, also singled out Thomas Muller for praise, while insisting that the 30-year-old still has plenty of years at the highest level ahead of him.

"When you start very young at a high level, people think you are very old. Thomas is not old at all, he started very young, he started playing World Cup and Champions League finals at a very young age and I don’t think we can even speak about longevity because he’s still a young player," Mourinho added.

"I don’t know him personally, I just have some feelings, and it looks for me like a happy guy and when you are happy, I don’t know if you live longer but you live in a better way and then longevity is a consequence of that too.

"I feel that he went through a difficult period at Bayern, quite a grey area, but since Flick got the team he started playing the team in a certain direction and his Muller’s position on the tactical organisation looks comfortable for him, and when he’s comfortable he’s a player who can score his goal, he can have his assist.

"He’s got a great mentality, he was there before many times, so this for him is just one more great moment in his career and that can only help the other guys."