Klopp: Liverpool will have some fun with exceptional Jones 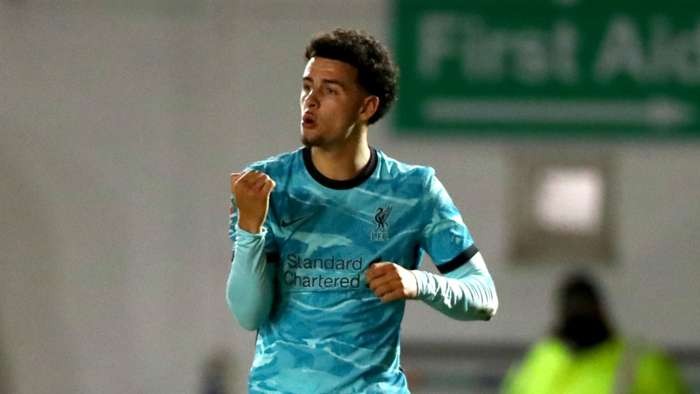 Jurgen Klopp says Curtis Jones is "an exceptional talent" and that Liverpool " will have some fun" with the teenage midfielder as he develops his all-round game in the coming years.

The 19-year-old produceda star turn duringLiverpool's 7-2 CarabaoCup third-round win over Lincoln City on Thursday, scoring twice as the Premier League champions set up a fourth-round clash with Arsenal next week.

It was onlyJones'16th appearance for Liverpool'sfirst team but Klopp suggested the midfieldercan expect to feature more regularly if he continues to perform at such a high level.

"I think each game is ideal for Curtis to play in because of the quality he has, the skills he has,"Klopp told a media conference.

"Both goals were difficult. I think the second goal, the first touch was absolutely exceptional. It was slightly deflected, but that'sjust exceptional.

"I think everybody knows my opinion about Curtis. He is an exceptional talent and we will have some fun with him, I'm pretty sure, in the future."

Takumi Minamino also impressed for Liverpool, adding to Xherdan Shaqiri's opener with a sublime effort from outside thearea and then claiming his secondshortly after the interval.

While Klopp was pleased with his potency in front of goal, he was also quick to praise the Japan international's relentless energy.

"I loved Taki's game tonight; it was absolutely outstanding and he was involved in so many situations," Klopp added.

"The opponent had to kick off seven times after Liverpool'sgoals and the first guy who chased the opponent again when they received the pass was Taki.

"He set the rhythm for all these pressing and counter-pressing situations, so I really, really liked his game tonight."

Liverpool face Arsenal in the Premier League on Monday before hosting them again at Anfield later in the week, although no firm date for their next CarabaoCup outinghas been set as of yet.