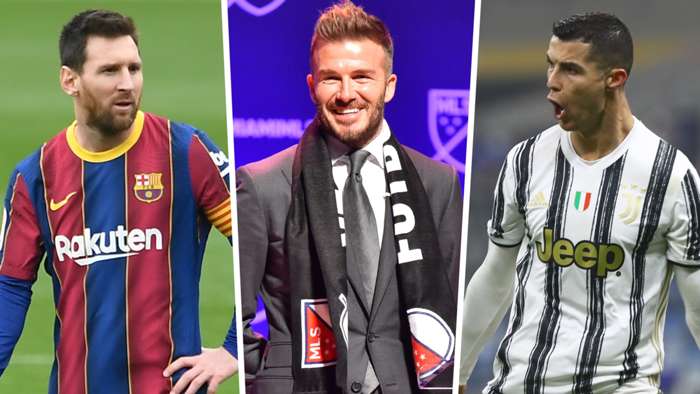 David Beckham has revealed that Lionel Messi and Cristiano Ronaldo figure on his transfer wish list at Inter Miami, with the Manchester United and Real Madrid legend eager to bring marquee additions to MLS.

He has already acquired the likes of World Cup winner Blaise Matuidi and ex-Juventus striker Gonzalo Higuain, but more signings are being lined up as superstar performers at Barcelona and Juventus register on the radar.

Beckham, speaking at a fan event ahead of the 2021 MLS pre-season,said when quizzed on interest in Messi and Ronaldo: “Without a doubt, those are the type of players that we aspire to bring to our club.

“I think that the fans would really appreciate that. But,as owners, we want players here that are driven, that want to win, and that's our priority.

“With Blaise Matuidi and Gonzalo, these are players that we feel add to the glitz and the glamour of what the club is.

“Going forward, we also want to bring other players in if we have the opportunity to bring some great names in, you obviously mentioned Leo and Cristiano.

“They've been at the top of their game for the last 15 years because of hard work. Sir Alex Ferguson was a master at it.

Barcelona talisman Messi has admitted in the recent past that he could be tempted to spend time in the United States before the day comes to hang up his boots.

The mercurial Argentine told La Sexta in December 2020: “I always said that I have the impression that I would like to enjoy the experience of living in the United States, of living in that league and that life, but if it happens or not I don't know.”

Portuguese icon Ronaldo has also seen a move to MLS mooted after reaching the very top of the game in Europe.

His fellow countryman Nani, who has played alongside the 36-year-old for Manchester United and Portugal, told ESPN in June 2020: "A couple of years ago, he told me that he will probably end up in America. It's not 100 per cent, but probably. There is a chance.”

Messi is currently seeing questions asked of his future at Camp Nou, with the 33-year-old yet to agree an extension to a contract that is due to expire in the summer.

It is not expected that he will head to the U.S. at this stage, with Manchester City and Paris Saint-Germain leading the chase for his signature, and there remains a chance that the six-time Ballon d’Or winner will continue his career-long association with Barca.

Ronaldo has also generated contract talk at Juventus, as his deal is due to expire in 2022, but a man with five Ballon d'Or wins to his name could take on a new challenge at some stage in the near future after being backed to play on beyond his 40th birthday.