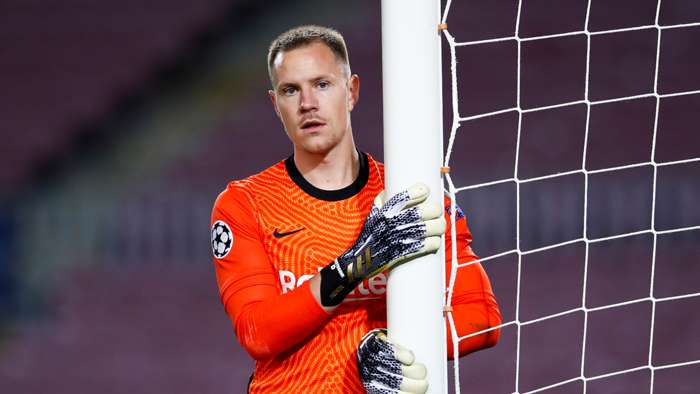 Ronald Koeman thanked "phenomenal" Marc-Andre ter Stegen for his part in Barcelona's narrow 2-1 win over Dynamo Kyivand acknowledged his side have plenty to work on.

However, Barca needed Ter Stegen to make six savesagainst a Dynamo side depleted by a coronavirus outbreak in their camp, including a top-class reaction stop to deny Vitaliy Buyalskiy.

Viktor Tsygankov eventually found a way past Ter Stegen, who was making his first appearance of 2020-21 after recovering from a knee injury, but Barca saw out the victory.

"He has proved to be a great goalkeeper for us," Koeman told Movistarafter the game. "He has been training well and we can see that today.

"We started the match well and quickly made it 1-0, but we were unable to find the second goal and then lost control.

"Thanks to Marc, who has been phenomenal, we managed to keep the opposition out."

Barca have made their worst start to a La Liga season in 18 yearsbut are well on their way to a place in the last 16 of the Champions League.

They are three points better off than second-placed Juventus at the midway stage and have an eight-point advantage on Ferencvaros and Dynamo, with a trip to the latter up next in three weeks' time.

Koeman struggled to find too many positives from his side's latest European victory, though, adding: "We have to play better and improve the game without the ball.

"Today we did not do that well. In general, we had been good defensively. But today they put us in danger and we must talk about that and improve our game without the ball."

Dynamo had an inspired keeper of their own between the sticks as Ruslan Neshcheret made 12 saves in total on what was just his second senior appearance.

Neshcheret was brought into the side due to the visitors' two other shot-stoppers being ruled out with coronavirus and the youngster produced the performance of a lifetime.

"It was like being in a fairytale," he said. "Playing at this great stadium in such a game is a dream for any footballer.